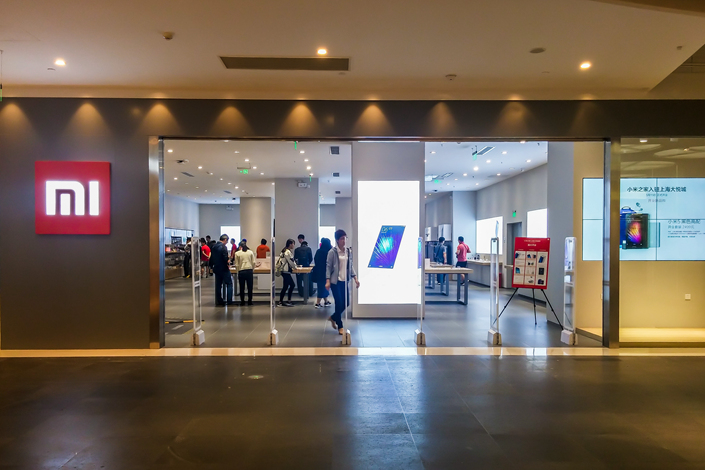 Customers try out electronic products at a Xiaomi store in Shanghai on May 13. Xiaomi Inc. plans to build more than 1,000 brick-and-mortar stores over the next three years as it abandons its online-only sales model. Photo: IC

(Beijing) — Globally minded smartphone maker Xiaomi Inc. plans to build up a network of more than 1,000 brick-and-mortar stores over the next three years as it abandons its online-only sales model in a bid to jump-start stalled growth.

Xiaomi shot to prominence two years ago by taking the China smartphone crown and becoming the world’s third-largest brand just five years after its inception, banking on a trendy image partly supported by its online-only sales model. But the company’s prospects have sharply reversed since then for a number of reasons, including an overreliance on the online-only model for a relatively expensive product that many consumers want to touch and feel before buying.

To address that shortcoming, Xiaomi began opening real-world shops last year and currently has about 50 such stores throughout China, mimicking rivals like Huawei Technologies Co. Ltd. and Apple Inc. The company plans to continue opening new shops, with 250 targeted for this year and a total count of 1,000 over the next three years, CEO Lei Jun said on Monday.

“I think e-commerce is just one part of new retailing,” said Lei, referring to an emerging model that has retailers experimenting with hybrids of online and traditional shopping. Such a model combines the convenience of internet ordering and home delivery with more practical matters like letting consumers personally inspect items before buying — an important consideration for more-expensive goods like home appliances and personal items like clothing.

Lei said the new brick-and-mortar stores will carry a wide range of Xiaomi products in keeping with the company’s original aim of developing an ecosystem of products and services centered on the internet. Other products include lesser-known Xiaomi offerings like smart appliances and internet TVs, as well as lower-tech products like backpacks and suitcases.

Xiaomi was riding high two years ago when it conducted its last publicly announced fundraising that valued the company at $45 billion. But its core smartphone sales have stalled since then, including a 40% drop in its home China market to about 10 million units in last year’s fourth quarter, according to data tracking firm IDC. In the process, the company’s China market share has slipped to 7.4%, or about half of what it commanded just a year earlier.

Separately, Lei said Xiaomi will also take a slower approach to its global expansion, a move that follows disappointments in its earlier efforts with the notable exception of India, which has become its second-largest market.

“Three years ago we were in a bit of a hurry, entering seven new markets all at once,” he said. “We ran into all kinds of difficulties and incurred big losses. Two years ago, we decided that global expansion is something we need to do, but we changed our strategy to develop a model with India and then slowly expand from there.”

Lei said overseas focuses for Xiaomi this year will include markets like Indonesia, Russia, Ukraine and Vietnam, adding that the company has already begun some local production in Indonesia.