China Mulls Incentives to Entice Parents to Have Second Child

By Sheng Menglu and Li Rongde 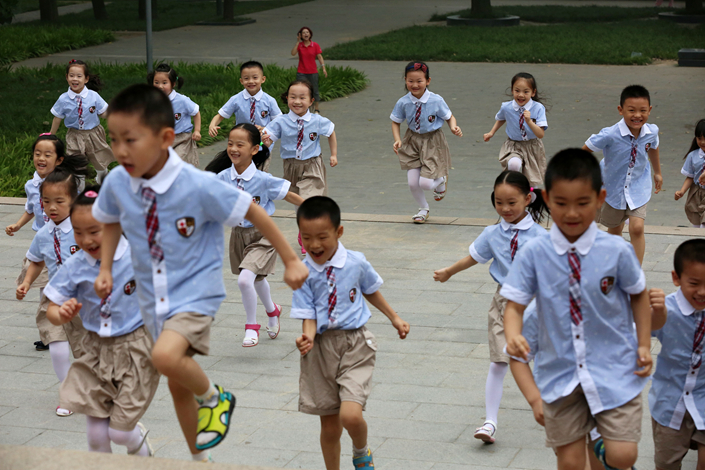 Children play in the park in Huai'an, Jiangsu province, in July 2015. Members of the National People's Congress and Chinese People's Political Consultative Conference are calling for tax breaks and other incentives for couples to have a second baby. Photo: IC

(Beijing) — Delegates to China’s National People’s Congress (NPC) and the top government advisory body, both now meeting in Beijing, have proposed allowances and tax breaks for couples willing to have more children in order to encourage more births and tackle the problems of an increasingly aging population.

The proposals come after the number of babies born under the nation’s new two-child policy — in place since the beginning of 2016 — appears not to be enough to increase or even sustain the country’s population of 1.4 billion.

A 2015 nationwide study by National Health and Family Planning Commission found that among women in their prime childbearing years of 15 to 49 years old, three-quarters of them said they do not want a second child due to financial constraints. More than 60% cited a lack of energy and support as the reason for not having a second child.

Li Wei, a member of the Standing Committee of China’s top government advisory body, the Chinese People’s Political Consultative Conference (CPPCC), proposed giving couples a reward equivalent to 10% of the average family income if they are willing to have a second child.

The level of the allowance makes sense because support for an extra child usually costs the public an amount equal to 5% of the average household income, and the child contributes about 15% of such income to care for their elders when they grow up, he said.

Couples willing to have a second child should also be given incentives, such as easier access to government-funded affordable-housing programs, Li said.

Several NPC deputies, including Lu Yaping, a private entrepreneur from the eastern province of Jiangsu, called for a tax break of 50% for parents who have a second child, or making the income of one of the parents tax-free.

Zhu Lieyu, an NPC deputy and a lawyer from the southern province of Guangdong, said policymakers should roll out a whole range of benefits for willing parents.

On top of tax deductions, the government should provide couples in their prime childbearing ages with childbearing insurance policies to tackle discrimination against them.

For example, the two-child policy could raise expenses for employers, who thus might not want to hire women. So the government could share with employers additional costs linked to maternity care and maternity leave, which women need to have if they want a second child, she said.

Public hospitals should also been given additional public funding to have more beds and to hire more gynecologists in the maternity care units to cope with a possible spike in deliveries, according to Xu Geliang, an NPC deputy and the head of Anhui Provincial Hospital in the eastern city of Hefei.

China’s central authorities eliminated the decades-old one-child policy, limiting most couples in China to one child, effective at the beginning of 2016. Two years earlier, the one-child policy was relaxed to allow a second child if one of the parents was an only child. Previously, both parents had to be only children to be allowed to have a second child.

About 17.9 million babies were born last year up by 1.3 million from a year earlier, according to Yang Wenzhuang, an official at the National Health and Family Planning Commission.

A projection by the commission shows the number of babies born each year over the next five years is expected to hover at between 17 million and 20 million.

More than 16% of China’s population is over 60, and those older than 65 exceeded 10.5% of its total population as of the end of 2015, according to official statistics, making the country far beyond having a “silvering population.”

Have you been thinking of having a second child? Would a government subsidy or a tax break entice you to take the plunge or what more needs to be done? Send us your story to news@caixin.com