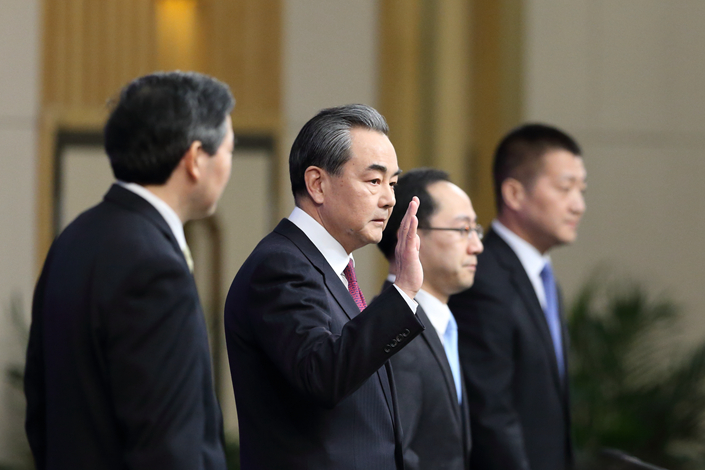 (Beijing) — Foreign Minister Wang Yi blasted the deployment of a U.S.-built missile defense system in South Korea as “obviously a wrong choice” and called on the U.S. and South Korea to halt its installation.

Wang’s remarks on Wednesday came two days after missile launchers and other equipment needed to set up the anti-ballistic missile system arrived in South Korea.

The U.S. and South Korea say the system — the Terminal High Altitude Area Defense, or THAAD — is designed to intercept and destroy missiles that would be fired by North Korea. But China has voiced concern that THAAD’s powerful radar could be used for snooping.

“The range that the THAAD system can detect extends far beyond the Korean Peninsula, and its attempt to endanger China’s strategic security is thinly veiled,” Wang said. The THAAD deployment “is not a way that a neighbor should behave and may put South Korea into an even more dangerous situation.”

Tensions on the Korean Peninsula have intensified as North Korea tries to build a nuclear arsenal, which has raised concerns among its neighbors and the U.S. Since last year, North Korea has tested a series of missiles. The arrival of launchers needed for the anti-missile system came one day after North Korea launched four ballistic missiles into the Sea of Japan, also known as the East Sea, which Pyongyang said was a drill for striking American bases in Japan.

Wang compared the tension on the Korean Peninsula to “two accelerating trains coming toward each other with neither side willing to give way.” China proposes that North Korea suspend nuclear and missile activities in exchange for a halt of U.S. and South Korea military drills, Wang said.

Beijing’s displeasure with the THAAD system has been felt by Lotte Co. Ltd., a major South Korean conglomerate that runs 115 supermarkets and five shopping malls in China.

Lotte agreed to a land-swap deal with the South Korean government last month that provides a site for the anti-missile system. As of Wednesday, local Chinese governments have forced 55 Lotte supermarkets to shut down. Protests also erupted in several cities and on social media platforms in China, with critics calling for a boycott of South Korean products in general, and Lotte in particular.

China also accounted for almost half of South Korea’s total international tourist visits last year, according to data from the Korea Tourism Organization. Some Chinese travel agents have stopped selling trips to South Korea and some Chinese netizens have said they will not travel to South Korea.