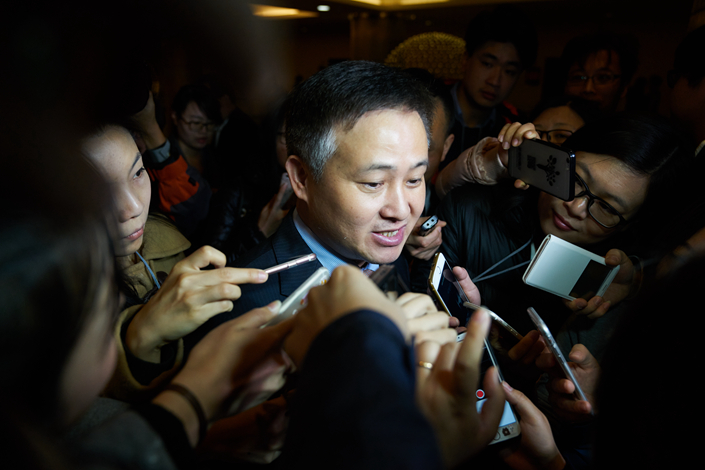 Pan Gongsheng, Deputy Governor of the People’s Bank of China and head of the State Administration of Foreign Exchange. Photo: Liang Yingfei/Caixin

Pan, who heads the State Administration of Foreign Exchange (SAFE), made the comments in an interview with Caixin, where he discussed the measures authorities have taken over the past several months to rein in capital outflows and stop the drain on China’s foreign-exchange reserves.

Companies are free to send the profits they make in China overseas in the form of dividends after they have been subject to reasonable and practical inspection by banks, said Pan, who is also a deputy governor of the People’s Bank of China (PBOC). Before submitting a request to remit funds, companies must pay any taxes owed, settle losses from previous years, provide financial reports and the consent of the board of directors to profit distribution, he said.

Since late last year, many foreign companies have complained about delays or extra documentation needed to send profits out of the country, blaming the difficulties on government restrictions, including unpublished “window guidance” given to banks, that were aimed at stemming capital outflows.

The authorities have repeatedly assured investors that the “authentic and legal” remittance of profits overseas is allowed. But the dissatisfaction has persisted to such an extent that SAFE and the PBOC went as far as publishing email addresses on their social media accounts last month for companies to send in their complaints.

The heightened scrutiny of foreign-exchange transactions followed increasing concern by the authorities last year that the country’s foreign-exchange reserves were being depleted by waves of capital outflows caused by the strengthening of the dollar and pessimism over China’s growth prospects.

The country’s capital account started logging a deficit from the second half of 2014 and the yuan started to weaken as capital outflows picked up. The yuan fell to below 6.7 per U.S. dollar by October 2016 from around 6.1 in mid 2014. It’s currently trading at around 6.9 per dollar.

After peaking at $3.99 trillion in June 2014, China’s foreign-exchange reserves fell to $3.33 trillion by the end of 2015 and as they approached the psychological “red line” of $3 trillion in the fourth quarter of 2016, the authorities stepped in with a range of measures to stop the decline.

Banks and regulators often turned a blind eye to suspect capital outflows when inflows were surging and didn’t strictly apply capital control regulations. But with outflows soaring, the rules were more rigorously enforced and authorities heightened their scrutiny of transactions, including the remittance of profits and funds for outbound investment.

The crackdown started in the fourth quarter of 2016 and has continued into the first quarter of this year. In January, SAFE clarified that additional documentation is required when foreign companies remit profits of more than $50,000 made on direct investments in China.

But foreign companies weren’t the only ones caught in the net. Policy makers stepped up supervision of overseas investments made by domestic companies out of concern that many projects and acquisitions were merely a way of siphoning money out of China.

Authorities enhanced scrutiny of requests by individuals for foreign currency, including their use of the annual $50,000 foreign-exchange quota. The government also banned the use of China UnionPay bank cards to buy life insurance policies offered by Hong Kong firms, closing a loophole used by mainlanders to transfer money overseas as the yuan continued to depreciate.

In his interview with Caixin, Pan said some overseas investments by Chinese companies were “unreasonable and abnormal,” echoing comments made by PBOC Governor Zhou Xiaochuan last week that some projects were “driven by overheated sentiment”. Zhou said many companies were blindly investing in projects and that appropriate government intervention was “necessary.”

Pan said that outbound investment has slowed from the last three months of 2016, suggesting Chinese investors have “regained some sense of rationality”, which is a good sign. He also said that the ban on using UnionPay bank cards to buy insurance policies in Hong Kong will remain in place.

Government data show that the enhanced scrutiny of capital outflows has had some initial success.

Ministry of Commerce figures show that outbound investment slumped by 35.7% year on year in January to $7.73 billion after a 39.5% plunge in December 2016. The declines followed a surge of 76.5% year on year in November and a 48.4% jump in October before the controls began.

China’s forex reserves, the world’s largest, rose to $3.0051 trillion last month from $2.9982 in January, the first increase since June, albeit a marginal gain. SAFE hailed the turnaround as a sign of easing pressures on capital outflows.

Pan also pointed to the repayment of external debt by Chinese companies as another factor in the stabilization of foreign-exchange reserves. He said companies had paid off significant amounts of their foreign liabilities in which had contributed to the capital outflows in the months through mid-2016.

SAFE data show that China’s total foreign debt fell to $1.35 trillion in March 2016 from $1.67 trillion a year earlier, but has since started to slowly rebound, and stood at $1.43 trillion at the end of September, according to the latest figures.