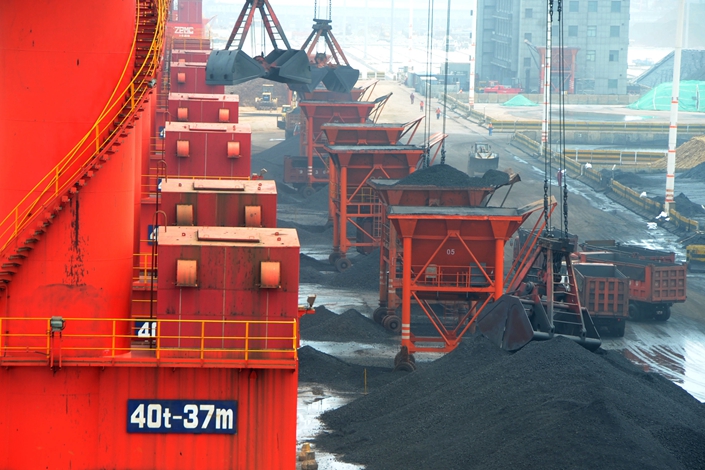 Imported coal is unloaded at a terminal in Lianyungang, Jiangsu, on July 6, 2013. China's National Development and Reform Commission said Thursday that it doesn't plan to reintroduce supply-reducing curbs in coal production. Photo: IC

“While coal prices remain in or above a reasonable range, we will not introduce measures to reduce quantitative production,” according to a statement posted Thursday on the website of the National Development and Reform Commission (NDRC), China’s top economic planning agency.

As part of its efforts to reduce excess capacity, the government shut down many coal mines last year and once ordered those still in operation to shorten the total number of working days. Coal prices shot up, as the market feared less supply.

Facing the runup in prices in the cold months, authorities in November temporarily suspended the limits on how many days mines that meet work-safety standards could operate, allowing mines to resume normal operations until March, when the heating season ends.

In mid-February, media reports surfaced that cited unnamed sources as saying that the NDRC was considering reimposing the restrictions on operating days as of the middle of March.

The market responded to those reported rumors immediately: Prices of the most-traded futures contracts of thermal coal, coking coal and coke jumped, and coal-related share prices rose in the following days.

Since Feb. 13, the benchmark freight-on-board price of the 5,500 kilocalories/kg thermal coal traded at northern China’s Qinhuangdao port has jumped 14% to 666 yuan ($97) per ton.

The NDRC in its statement blamed the recent rise in coal prices on increased demand by coal-fired power plants that revved up production amid a rise in electricity consumption this year. The NDRC also said coal supplies hadn’t grown quickly enough since the Spring Festival holiday, which this year was celebrated from Jan. 27 through Feb. 2, and because of stricter enforcement of safety rules at mines.

The NRDC issued the statement after a meeting with other government agencies on the implementation of planned capacity cuts at steel factories, coal mines and coal-fired power plants.

Domestic prices of steel have also been rising due to the government’s imposition of capacity cuts last year.

But the NDRC’s statement said both domestic coal and steel prices will stabilize soon.

“There is no condition for coal and steel prices to increase by large margins because their supply for the current and the next stages is guaranteed, and there has not been a fundamental change in the oversupply problem,” the statement said.

The statement said coal prices will “fall steadily” due to factors that include the end of the heating season, measures to encourage power generation from cleaner resources and acceleration of coal mine output.

Premier Li Keqiang said in his government work report published earlier this month that China aims to trim steel capacity by about 50 million tons and close at least 150 million tons of coal production capacity in 2017.

The government will also suspend or postpone construction on or close no less than 50 million kilowatts (kW) of coal-fired power generation facilities to tackle an electricity supply glut and “make room for clean energy,” he said.

China last year shed more than 65 million and 290 million tons of steel and coal-mining capacity respectively, according to official data.