Culture: Exploring the Unique Challenges of a Rising China with Author Martin Jacques 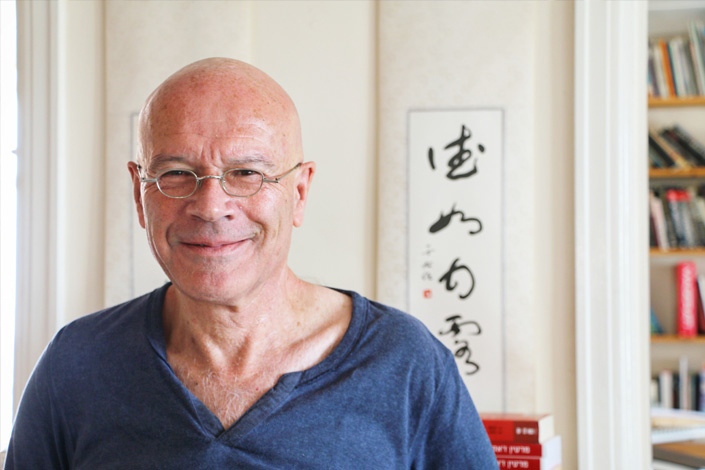 Martin Jacques says that although China is reaching out globally, it does not see itself a a model. "They don't require other countries to be like them," he says. Photo: Martin Jacques

During the long years that Martin Jacques devoted to writing what became the international bestseller When China Rules the World: The End of the Western World and the Birth of a New Global Order (Penguin, 2009 and 2012), he never imagined the book would sell more than 350,000 copies, be translated into 15 languages, and have the tremendous global impact it has had.

Indeed, not long after Jacques moved to Hong Kong and began work on the project in 1998, his wife, Harinder “Hari” Veriah, died a tragic, and seemingly preventable, death, plunging him into a deep despair. Veriah, who was only 33, was a Malaysian of Indian descent, and Jacques believed that her death in a Hong Kong hospital on Jan. 2, 2000, was the result of “abject negligence” that sprang from the racial prejudice he had so often seen directed at her during their 14 months in Hong Kong. Jacques brought legal action against Hong Kong’s Hospital Authority and, after a 10-year battle, the authority agreed to a settlement to avoid going to court.

“As a Malaysian of Indian descent, she had suffered a great deal of racism in Hong Kong, far worse than in London or Kuala Lumpur. People would refuse to serve her in restaurants, keep her waiting in shops, mutter abuse at her in the street, and she suffered at work, too,” wrote Jacques in a commentary published by The Guardian soon after the case was settled in 2010. “When we were together, she was given my color; on her own, it was an entirely different matter. Barely anyone talked about Hong Kong's endemic racism.”

Veriah’s death helped lift the veil of denial and triggered public debate over what had long remained “Hong Kong’s dirty secret.” Over time, this momentum pushed the government to abandon its position that racism was only a minor problem, and in July 2008, the first-ever anti-racism legislation was introduced in Hong Kong.

Jacques was so grief-stricken after his wife’s death that he could not write for five years.

“I don’t know how the hell I finished the book except that I am somehow a determined person and I felt I had to finish it for her,” Jacques said. “So, I had two purposes. One was looking after (my son) — he was my reason — and my secondary reason was to finish the book.”

Jacques is now at work on a second book, which looks further into a future in which China is a major global power. In February, he traveled to Stanford University and, at a packed event organized by its Center for East Asian Studies, addressed China’s role in the rapidly evolving global order with eloquence, elegance, and passion. Afterward, I followed up with several questions, which resulted in a wide-ranging conversation; Jacques’ reflections are presented here with some context, his answers edited for length.

I started by asking Jacques, who trained as a historian and spent many years as a journalist, including as editor of Marxism Today and deputy editor of The Independent, about his relationship to Sinologists and Sinology.

“I wasn’t a Sinologist, I am absolutely new to it,” he said. “My interest in Asia, (which) started in 1993, was East Asia in a broader sense, and as China gathered momentum, I became more interested. I was very respectful of scholars of China ... especially Lucien Pye (who died in 2008); I think that Pye had a feel for China and the Chinese which most Sinologists don’t have.”

He continued: “The key idea in my book — the civilization-state argument — was inspired by a few sentences by Pye, that China is a civilization pretending to be a nation. He says that from the beginning, China was fundamentally different. There’s no requirement by Pye that China end up like us — this is the huge disappointment of so much China scholarship, and (Sinologists) were very slow to understand what the China transformation was about.

“One thing that strikes me (in the Western analysis of China) is the absence of Chinese intellectual voices. It’s as if the Chinese scholars are not enfranchised because they are regarded as voices of the regime as opposed to being intellectuals in their own right. They are quoted sometimes, but not enough — the leading commentators on the transformation of China are Chinese!”

During his presentation, which was titled China, Trump, and the Future of the Global Order, Jacques suggested that America’s relationships with many other nations were weakening and the era of “Pax Americana” was nearing an end. I asked if that meant the era of a “Pax Sinica” was in the cards.

“The world is more complex, and China’s influence is growing very rapidly and you can see China over the last three or four years has become much more confident about saying things about the direction of globalization,” he said. “China, from being a follower and beneficiary, has become a maker and shaker of globalization and in that you can see the beginnings of Pax Sinica.”

“I think it is mistaken to think that China as the premier global power will behave in the same way as the U.S. because China’s relationship to the world has historically been so different. … America was a very outward looking country, whereas China was much more focused on itself because it was a remarkably successful country,” Jacques said.

“China had this ‘Middle Kingdom Mentality.’ Now it is moving outwards in a way it has never done. But there is one important kernel or core of continuity, and that is that China doesn’t see itself as a model. The European powers thought of themselves as a model — you speak our language, use our education, adopt our religion — that was colonialism. But the Chinese have never seen themselves as a model, and that is a form of exceptionalism. They don’t require other countries to be like them.”

I asked him to elaborate on how he saw China’s cultural power growing.

“What I take (as cultural power) is the extent to which countries are influenced by, and to some degree accept, your value system. At the moment, it is true that China’s influence in this regard is very limited,” he said. “I think state-constructed attempts (to propagate culture) are seriously limited in their effect. Cultural influence is more visceral, it’s more diverse, you can’t legislate it — one of the tendencies in the Chinese regime is to think you can.”

I asked Jacques, who is a visiting professor at Beijing’s Tsinghua University, if he foresaw China becoming an education powerhouse.

“It will definitely become an education powerhouse, but I wonder what the limits are,” he said. “Tsinghua is not yet international, still not diverse enough, and restrictions on the internet are problematic for its ability to become properly engaged in global dialogue.”

Jacques, in his talk, commented that Westerners have found it “very difficult to come to terms with the rise of China, to understand its roots, its capacity for endurance” largely “because there has been an insistence on trying to understand China through a Western prism — which is ridiculous.” I asked him to elaborate and he referenced the writing of the American historian Paul A. Cohen.

“And what happens when you can no longer run the world? When global dynamism is shifted away from the West, but the West doesn't have the knowledge to understand the rest of the world?” Jacques asked. “This puts the West on the defensive, profoundly on the defensive, for a long historical epoch.”

Sheila Melvin is a newspaper columnist. Her latest book, Beethoven in China: How the Great Composer Became an Icon in the People's Republic, co-authored with Jindong Cai, was published by Penguin Books.