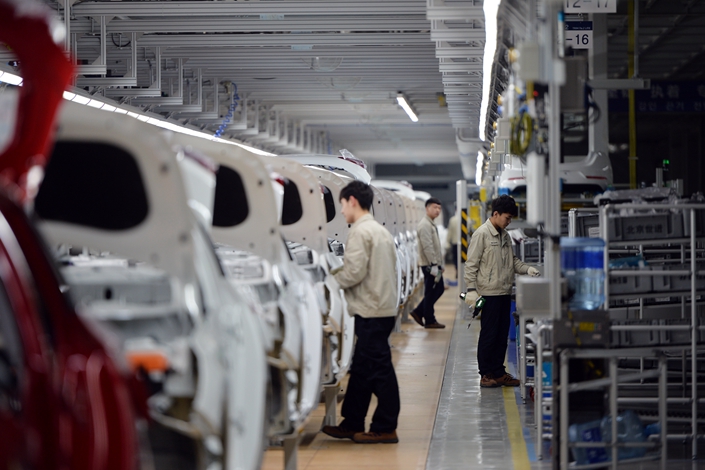 (Beijing) – Chinese banks are running a dangerous, bubble-building business by pouring money into speculative financial investments, the minister of Industry and Information Technology said Sunday, as he vowed to improve the appeal of the manufacturing sector to investors.

The return on investment in China’s manufacturing industry is rather low. Much of the country’s banking capital has found its way into the financial market, instead of supporting the real economy, said Minister Miao Wei.

“Such an operating model is very dangerous. This is the onset of a bubble,” he said at the China Development Forum, sponsored by the Development Research Center of the State Council, China’s cabinet. “Though there will be satisfying returns for banks in the short term, in the longer term, this will accumulate and become a systemic risk.”

Even manufacturers themselves have been investing their profits in financial products, which is a “real problem,” Miao said.

Manufacturing is fundamental to China’s future development, he said, and trying to make money solely from financial markets will “give a rise in bubbles and set up a potential crisis for economic development.”

Growth of investment in manufacturing slowed to 4.2% in 2016 from 8.1% in 2015, official data show. Miao said access to capital was particularly limited for small- and medium-sized companies.

In an attempt to make the industry more attractive to investors, the government will encourage companies to upgrade on the value chain with innovation and better services to boost their profitability, Miao said.

He added reforms will be carried out to widen market access to more sectors – especially monopolized or state-dominated industries – to private capital, which accounts for more than 60% of China’s total investment in manufacturing.

The government will gradually reduce “discrimination” against private investors in its administrative management to treat them equally to other investors such as state-backed capital, he said.

Meanwhile, Kristalina Georgieva, chief executive officer of the World Bank, urged China to build a sound financial system that promotes competition for the success of its economic restructuring.

“When stimulus money is abundant, even inefficient firms survive,” she said at the same forum.

“So we need to see more increase in competition to make it easier to enter market and exit market to reduce the burden on startup firms, simplify bankruptcy procedures and level the playing field.”

Competition depends on a well-functioning financial system that supports investments with high returns, is willing to provide financing for innovative startups and plays “the active role in deleveraging and restructuring,” she said.

There are “plenty of lessons from the world for China in this area,” she said.

The Chinese government should be careful about the extent of its involvement in economic restructuring and the implementation of its industrial policies, Georgieva said.

She warned that experiences in some emerging markets have shown that “industries that were protected behind high tariff barriers never grew out of infancy and remain the burden to the state and the economy.”