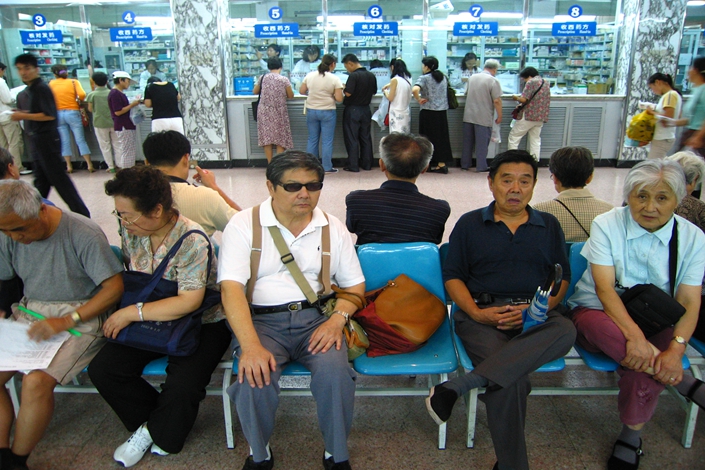 People line up to pay in a hospital in Beijing in August 2005. Beijing municipal officials have introduced new rules on hospital billing, banning the markup of prescription drug prices and the imposition of consulting fees on patients. Photo: IC

(Beijing) — Beijing municipal health authorities have begun what could be sweeping reform of billing at public hospitals with the hope of lowering patient costs and reducing incentives for price-gouging by medical providers.

Under the new rules, which go into effect April 8, public hospitals will be barred from marking up prescription drug prices and from imposing consultation fees on patients, instead requiring the charging of a single medical service fee.

The changes will bring public hospitals in line with practices at private facilities in China and hospitals in many other countries.

However, the attempt at reform could do little to curb expenses if public hospitals remain underfunded, said Zhang Jian, a former president of Beijing Friendship Hospital.

The Beijing municipal government has agreed to allow public hospitals more flexibility in setting prices over inpatient services and operations, according to a revised set of comprehensive rules released Wednesday.

The Chinese capital has been at the forefront of hospital reform as medical expenses have soared over the past decade and public discontent has risen.

The source of contention is markups of roughly 15% that doctors at public hospitals have been allowed to impose on drugs they prescribe and on the often-hefty fees they impose for medical checkups.

In 2012, Beijing launched a trial-program reform at five public hospitals similar to the broader reforms now being attempted.

Outpatients paid 83 yuan less on average overall than they did before the trial program and 55 yuan less for medical tests, according to Feng Guosheng, former director of the Beijing Municipal Administration of Hospitals, which oversaw the program.

Under the new requirements, patients will pay a single service charge of 50 to 100 yuan for each hospital visit at top-tier hospitals in the capital and can receive a 40-yuan reimbursement via government-backed medical insurance.

For smaller community hospitals, patients will be charged a service fee of 20 to 80 yuan for each visit, and would be entitled to up to 20 yuan in reimbursement.

The key to the reform’s success is how far regulators will go to ease price controls over inpatient medical services without undermining the nonprofit model of public hospitals, said Zhang of Beijing Friendship Hospital. This may mean allowing price increases on premium services such as surgeries and hospitalizations.

The government will also need to increase funding for public hospitals, which will have reduced avenues for revenue, said Zhang, who is now head of Henghe Hospital, a privately run upmarket hospital in Beijing.

Most of the public hospitals are publicly run, but the government provides them with only 10% of their operating costs, and the hospitals must generate the remainder, which largely comes from drug markups, according to professor Wang Zhen of the Chinese Academy of Social Sciences’ Center for Public Policy Research.

In the current system, hospital management and doctors are given incentives to prescribe patients with larger amounts of drugs than they need, more expensive drugs, and at higher costs, to make money via the markup system, Wang said.

With these practices banned under the new rules, patients will not have to cover unnecessary drug costs, he said.