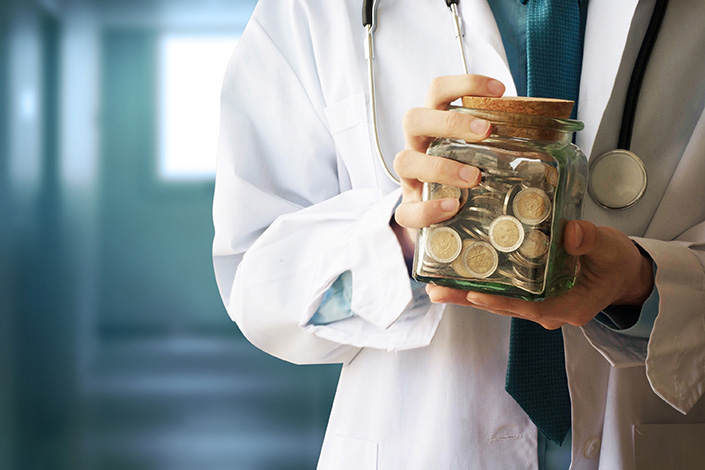 (Beijing) — China will launch a yearlong pilot program to improve doctors’ pay amid a growing number of incidents of physician corruption and negligence, a situation that has been blamed on poor salaries.

Earlier, part of a doctors’ benefits package was linked to how much hospitals earned from selling drugs and medical tests.

The trial program aims to boost the base pay for physicians and put an end to the controversial practice, according to a document jointly released Friday by the National Health and Family Planning Commission and three other central government agencies.

Since government subsidies cover only about 10% of their expenses, public hospitals are forced to impose a high markup on drugs and charge hefty amounts for tests to stay afloat.

The plan also eases government price controls and gives clinics a greater say when deciding on consultation fees and inpatient-care charges. Public hospitals were earlier allowed to keep only a small portion of their earnings. But under the new plan, they can “retain a larger percentage” of their revenues and use them to increase doctors’ pay according to merit. The document, however, did not specify the amount.

The trial program will be launched “immediately” at select public hospitals in all mainland provinces and autonomous regions except for Tibet. Authorities did not give a reason for the exception.

The pilot program is the latest effort to reform the country's ailing public health system. Authorities are trying to strike a delicate balance between the need to maintain the nonprofit nature of public hospitals while addressing the rising discontent among poorly paid medical workers.

Local governments in Shanghai and 10 other provincial-level governments have tried to revamp their public health systems since 2012.

Doctors in the public sector were earlier treated as civil servants and could work only in one hospital. The number of physicians that a hospital could hire was also subject to tight government control. But facilities participating in the pilot program will be allowed to hire highly skilled physicians on a contract basis, according to the new program. Although doctors in some cities have been allowed to work part-time in multiple clinics since late 2014, the number of physicians making use of this opportunity remains low given the bureaucratic hurdles involved.

Many were blocked by their full-time employers, said Yu Ying, who earlier worked at one of the country’s top hospitals, the Peking Union Medical College Hospital. Yu now heads the outpatient unit at a Beijing-based private hospital, Amcare. The pilot program aims to cut red tape linked to hiring part-time physicians.

Hospitals have also turned a blind eye to the widespread problem of doctors’ prescribing patients excessive amounts of drugs in return for kickbacks from pharmaceutical agents.

Such practices harm the reputation of public hospitals, said professor Wang Yanzhong from the Chinese Academy of Social Sciences, the government-affiliated think tank.

Improving doctors’ pay at public hospitals will hinge on whether regulators can develop an effective appraisal system to reward the best while making sure that medical services are affordable to all, he said.

Amid rising public discontent over soaring medical bills, the central government in April 2012 ordered public hospitals to phase out a 15% markup on drugs they sell.