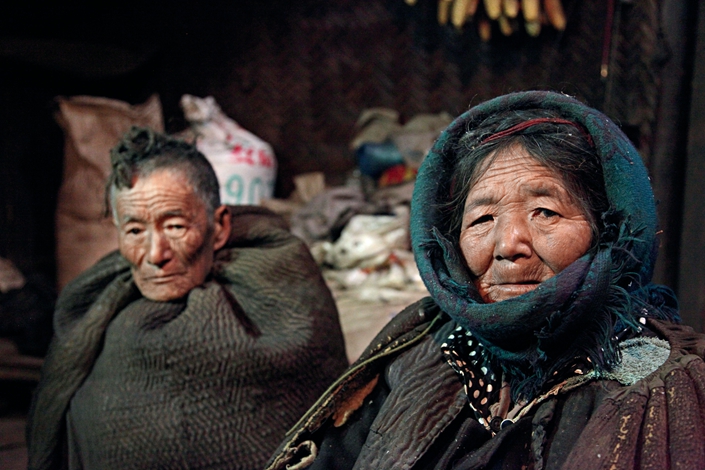 The parents of convicted murderer Jize Aizhi at their home in Meigu county, Liangshan Yi autonomous prefecture, Sichuan. They didn't know their son took drugs and made money in such a dangerous way. Photo: Zhou Di

(Liangshan, Sichuan) — When Chen Yuanping accepted a job at a construction site in Beijing from a man he barely knew, it’s doubtful that he would have expected the offer to literally turn out to be a death trap.

The 30-year-old from a rural village in Shaanxi province was murdered by his associate and several accomplices in August 2014, who then used his corpse to stage a fake accident and claim over 1 million yuan in compensation from the construction company by posing as the victims’ relatives.

His grisly death and what followed echoes stories of murder frequently heard in construction sites and coal mines across China.

Chen, who was working on the 13th floor of a high-rise in Beijing’s upmarket Shunyi district on that fateful day, was about to end his shift when he was hit on the head from behind by a steel bar, court papers viewed by Caixin showed.

A few minutes later, his corpse was found lying in a pool of blood on a balcony on the second floor with his skull cracked open. “Someone fell off the building!” two of Chen’s co-workers Mahai Youbu and Jize Azhi yelled out while rushing down to report “the accident” to the site managers.

But the pair weren’t the concerned colleagues they appeared to be, according to details that emerged during a trial, which found Mahai, Jize and three other accomplices guilty of Chen’s death. One of them had knocked Chen unconscious with a metal bar and the duo had then lifted Chen and thrown him down 11 floors, killing him instantly on August 17, 2014, the pair later confessed to the police.

Jize pretended that the dead man was one of his relatives and over the next two weeks, he and Mahai negotiated for compensation with their employer. Chinese construction companies usually don’t sign contracts with laborers. Instead, site supervisors are tasked with maintaining a payroll, which means at times there were no proper records of individual workers. In Chen’s case, the site supervisor didn’t have any identification information of the dead man, a loophole that the criminals exploited.

The pair, from Meigu County in Liangshan prefecture, an impoverished area in Sichuan province, even brought in several people from their hometown including one of Jize’s brothers to pose as Chen’s next of kin, according to court documents.

But as the negotiations dragged on, the duo and their accomplices pretending to be Chen’s family became desperate to close the deal and they voluntarily lowered the compensation demand from 1.6 million yuan to 550,000 yuan, Li Heming, a company representative who was handling discussions with the group told the court. They also requested company executives not to involve the police and requested that Chen’s body be cremated, which raised suspicions among representatives from the construction firm.

“They even threatened to bring their entire village to Beijing if we didn’t agree to their demands and I alerted the police after I felt that there was something fishy behind the circumstances of Chen’s death,” Li said during the trial.

In similar cases in the past, murderers have gotten away because owners of private mines or subcontractors at construction sites would opt to settle cases privately to hide other problems such as operating without a license or a breach of safety rules, according to an official from Meigu County. But in Chen’s case, the plot was foiled.

In December, a Beijing court handed a suspended death sentence to Jize Aizhi, 29 and Mahai, 32, from Erkou village in Sichuan’s Liangshan prefecture for the premeditated murder of Chen. Three other accomplices were given jail terms ranging from 15 years to life imprisonment. The defendants were also ordered to pay Chen’s family 70,000 yuan in compensation. Two others identified as Jize Yifu and Jize Guofu from the same village and another unnamed accomplice are still at large, according to local police.

There have been similar killings at Chinese construction sites and mines, with crime syndicates killing undocumented workers and using their corpses to stage fake accidents and extort money from companies by posing as victims’ relatives.

Last June, Bayannur Intermediate People's Procuratorate in the coal-rich northern region of Inner Mongolia charged 74 suspects with murder, fraud and blackmail linked to the deaths of 17 miners whom they had allegedly killed before posing as their families to claim compensation from mine owners. The trial is still ongoing.

A critically-acclaimed 2006 feature film, Blind Shaft, by independent filmmaker Li Yang put the spotlight on this dark secret that has long been hushed up.

The gritty movie, which never made it to the big screen on the Chinese mainland, was based on a real-life incident in the late 1990’s that involved a group of miners who plot to kill 52 colleagues in fake mining accidents at several small, unlicensed mines to extort money from owners.

Jiang Ruofeng, then governor of Leibo county, also in Liangshan prefecture, said publicly in 2014 that local police had got wind of criminal gangs in Leibo involved in such killings in 2007 and the number of such cases linked to suspects from the county peaked at 18 in 2009. Such murders are still reported from time to time, he said.

Most of the alleged criminals killing for compensation lived in extreme poverty in underdeveloped areas and were relying on murder to make some quick money, according to Jiang.

Erkou village in Liangshan prefecture’ is among the poorest in the country.

Mahai and Jize used to work as security guards in Beijing making somewhere between 2,000 and 3,000 yuan each a month, according to evidence presented at their trial.

Masha Erye, the youngest brother of Mahai Youbu told Caixin that five of his six siblings had left the village to work elsewhere. He and his mother and sister earned about 3,000 yuan each year by growing corn, buckwheat and potatoes and raising a few chicks in their small piece of land, he said. Their earnings were well below the poverty line given that the average annual disposable income for farmers in Sichuan was estimated at over 11,000 yuan in 2016, by the provincial statistics bureau.

Most of the families in Erkou village live in adobe houses. The homes of Mahai and Jize Aizhi only had a few pieces of old furniture and some of the walls were cracked.

But the homes of Jize Yifu and Jize Guofu, the two brothers who masterminded Chen’s murder, were newly refurbished with new furniture, a Caixin reporter who visited the village saw.

The duo was also linked to other similar killings, according to a villager from Erkou who asked not to be named.

The claim was also supported by evidence presented during Chen’s murder trial. According to Jize Azhi’s police confession, he had received a phone call from Mahai Youbu, a fellow villager in July 2014 who had asked him if Jize wanted to “make some big money.” Jize, a drug addict, was also promised drugs “after the job is done.”

In a meeting that followed, Mahai had told Jize Azhi that Jize Yifu and Jize Guofu had planned to kill someone at a construction site and then make it appear as an accident to extort money from the contractor, the confession read. Jize Azhi was promised a 40,000 yuan cut if he joined.

“I agreed because I have heard of such killings carried out by other guys in my village and how much money they’ve made,” Jize Azhi told investigators.

A few days later, he was given 2,000 yuan and told to go to Xicheng, the main city in Liangzhou prefecture to pick up Chen Yuanping. Chen hadn’t visited his family since 2012, according to court documents, and his family wasn’t aware that he had left to find work in Beijing. So when police came knocking on their door, investigating Chen’s possible murder, they were shocked.

Chen’s sister broke down in tears, when the verdict of the trial was announced, while the rest of his family sat in silence. Mahai and Jize Azhi didn’t turn around as they were being led away.