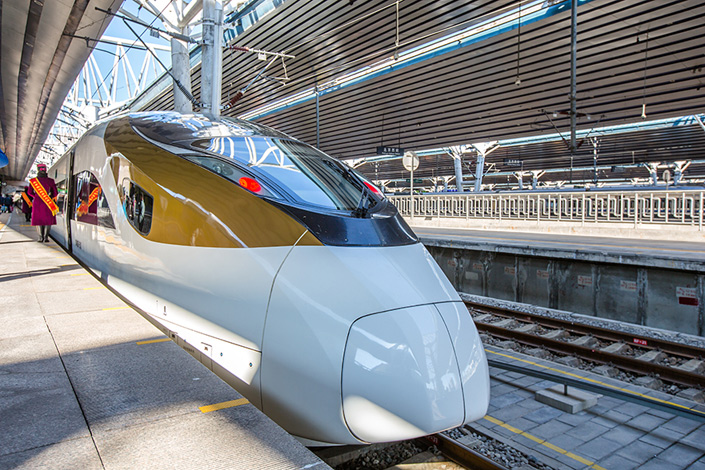 A CRRC train, the Golden Phoenix, is seen at the Beijing West Railway Station on Feb. 25. CRRC expects its train sales to drop by a third over the next decade. Photo: Visual China

(Beijing) — Leading Chinese rail equipment maker CRRC Corp. Ltd. expects its train sales to drop by a third over the next decade, as domestic purchasing starts to subside following a multitrillion-yuan building spree.

CRRC revealed the figures to Caixin as it posted the first annual profit decline last year since the company’s formation in 2014 through the merger of two former state-owned rivals. The company’s revenue also dropped following a peak in railroad construction over the last two years that has given China the world’s largest high-speed rail network.

“The year 2015 was a historic high,” said the source, speaking on condition of anonymity due to the private nature of new forecasts. “We expect Chinese train sales won’t ever surpass those levels again.”

CRRC expects to post about 30 billion yuan ($4.35 billion) in annual train sales on average in the five years from 2020 through 2025, down from an anticipated average of 40 billion yuan in annual sales over the next five years, the source said, citing figures from a recent meeting to discuss CRRC’s future business outlook. On the whole, annual train sales are expected to decline about 35% between 2015 and 2025, he said.

The building frenzy over the last decade has given China a national rail network that includes more than 22,000 km of track costing more than 4 trillion yuan. Much of that has been high-speed rail, greatly reducing travel times between big cities.

But as most of China’s affluent big cities get high-speed rail service, the pace of new building is expected to slow gradually over the next decade. Adding to the slowdown, many new cities to get service over the next 10 years will be in China’s mountainous, poorer interior regions where high-speed rail is impractical, and where building will involve lower-speed lines that typically cost less to operate.

An inflection point is expected around 2025, after which sales should start to stabilize and rise again as older high-speed trains start to retire.

In a separate announcement, CRRC said its profit fell 4.4% last year to 11.3 billion yuan, while its revenue dropped by a similar 5% to 229.7 billion yuan. Within that figure, the company’s railroad equipment unit, its biggest single revenue source accounting for about half of total sales, saw its revenue drop 18% to 106.9 billion yuan.

As domestic train sales ease, CRRC has been looking to other products like subway cars and overseas sales to offset some of that slowdown. The company has scored a number of recent successes with its subway business, landing a series of contracts to supply cars to systems in the U.S. cities of Boston, Philadelphia, Chicago, New York and Los Angeles.

But CRRC has been less successful with its high-speed train exports. It landed a number of high-profile contracts in markets like the U.S., Mexico and Europe, only to see them derailed for various reasons.