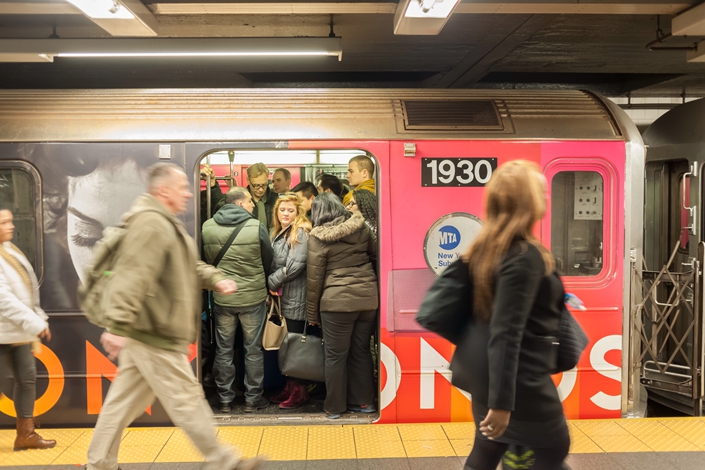 Commuters crowd into a subway car at a New York City subway station. A CRRC-led consortium is the lead candidate to win a contract to supply subway cars to the U.S.' largest city. Photo: IC

(Beijing) — A consortium led by CRRC Corp. Ltd. and Canada’s Bombardier is the lead candidate to win a major contract to supply subway cars to New York City, extending a recent round of global wins for the aggressive Chinese rail firm as it seeks to export its technology.

Major developments have recently occurred in bidding for the contract, with the CRRC-Bombardier plan getting the strongest support from New York, a knowledgeable source close to the consortium told Caixin on Wednesday, speaking on condition of anonymity. He said a major development could come soon, and added that CRRC is aggressively bidding for other similar projects in the U.S.

China has spent trillions of yuan over the last decade building up state-of-the-art subway and high-speed rail systems throughout the country, providing greater mobility within and between cities as part of its transition from a planned to a free-market economy. That process has created a group of companies like CRRC, which have developed cutting-edge technologies that many are now trying to export.

Under their previously submitted plan, CRRC and Bombardier agreed to build a manufacturing facility in New York to make the subway cars if their bid was chosen. The consortium was one of about 50 bidders for the contract, which called for supplying 1,025 subway cars for the New York subway system.

CRRC has won previous U.S. orders to supply subway cars in the cities of Boston and Chicago, as part of its recent push into global markets. Earlier this month it started work on a plant near Chicago, a year after clinching the $1.3 billion contract to supply 846 rail cars over a decade to the Chicago Transit Authority. Production is set to begin at that facility in November 2018. The company’s Boston deal will see it supply over 400 cars to the East Coast city.

CRRC has also been aggressively peddling its high-speed rail technology overseas, but has had less success on that front. It previously landed high-profile deals to build rail lines in the U.S., Mexico and Thailand, only to see those ultimately collapse for different reasons. Another Chinese project to build a high-speed rail line between Hungary and Serbia also received a setback last month, when media reported the European Commission was examining the project for possible violation of EU procurement rules.