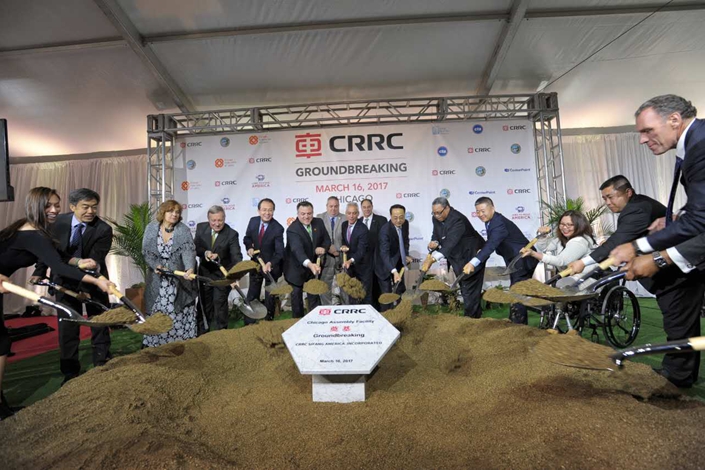 CRRC Corp. Ltd. holds a groundbreaking ceremony on March 16 for its new for its new factory in southeast Chicago. Photo courtesy of CRRC

(Beijing) — China’s state-owned train maker has started work on a plant in Chicago, a year after clinching a $1.3 billion contract to supply rail cars to the Chicago Transit Authority.

CRRC Corp. Ltd.’s American branch held a groundbreaking ceremony on Thursday for its 45-acre manufacturing facility in Chicago’s Hegewisch neighborhood in the city’s southeast corner, bordering the state of Indiana. The company said it was abiding by U.S. laws that require “sufficient quantities” of iron, steel and manufactured goods for public use to be produced in the country.

The $100 million project will return rail-car manufacturing to Chicago after a 50-year absence, city authorities told the Chicago Tribune. The deal to deliver 846 metro train compartments over a decade is the biggest such overseas contract for the Chinese rail maker to date.

The assembly lines will roll out 168 rail cars each year, starting in November 2018, a CRRC employee told Caixin. The factory will employ 169 people in Chicago.

The plant will be used for assembling rail car components, and 60% of what is spent on making each unit will go to U.S. suppliers, said Liu Chengyong, general manager of CRRC’s American branch, CRRC Sifang America.

Given the harsh winter weather in Chicago, which frequently has subfreezing temperatures and snowstorms, CRRC will equip the rail cars with its latest cold-endurance technology to ensure safety and comfort, the CRRC official said.

The Chinese train maker has been pursuing overseas deals, following a decade of developing cutting-edge rail technology while constructing China’s massive high-speed rail network and numerous local subway systems. Some of its major foreign deals include two agreements to supply over 400 subway cars in total to the Boston transport authority and three high-speed trains to the Czech Republic.

CRRC is also building a plant in Springfield, Massachusetts, for the Boston deal, and the facility will be completed this year, a source close to CRRC told Caixin.