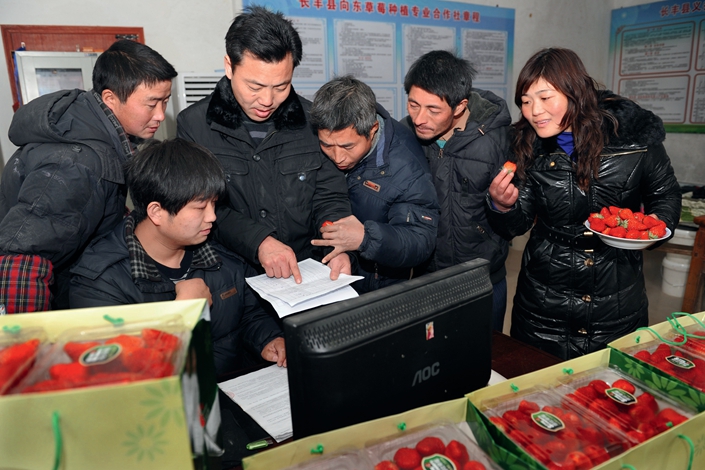 (Beijing) — While China’s banking system is now the world’s largest, a major part of its vast countryside has been left out of the country’s mainstream financial infrastructure.

Filling the gaps are over 1,000 rural community banks that have been opened over the past decade to offer basic financial services like taking deposits and organizing loans for those living in underserved rural areas. But such banks come with their own unique problems, including high loan risks associated with borrowers’ inadequate collateral, and the difficulty the banks have making a profit.

Since the first rural community bank was opened in 2004 in Ma’an, in northeast Sichuan province, a total of 1,519 rural banks have opened in towns and villages across the country by the end of 2016.

Community banks are usually founded by larger banks that tend to hold no less than a 15% stake and agree to provide technology, employee and management support. If a community bank encounters a liquidity crisis, the founding bank is obliged to rescue it, according to banking industry rules. But unlike subsidiary banks, community banks are registered as independent legal entities and operated independently. Their business is usually limited to within the township in which they are located.

Authorities have thrown their weight behind policies to improve financial services in the country’s rural hinterlands, home to more than 600 million people, but big commercial banks have shown reluctance to do so due to the prohibitive costs associated with building branches in less-developed regions.

Bank of China, one of China’s largest lenders, has founded 82 community banks in 12 provinces, the most among all domestic banks.

Over 80% of the loans extended by community banks are offered to rural households or small and micro-businesses, the biggest sources of rural credit supply, according to Ma Xiaoguang, deputy director of the CBRC’s rural financing department.

Some community banks have seen their assets surge to more than 10 billion yuan over the past decade, equivalent to those of small commercial banks, but most community banks are still small players with a capital size ranging from 50 million yuan to 100 million yuan, according to Guo Qin, an official at the CBRC bureau in Henan province.

Rural community banks are designed to offer low-cost loans for small amounts of money to meet the financing needs of rural dwellers, but the banks are exposed to high levels of risk as most of their borrowers are rural households and small businesses that have inadequate collateral.

To address the problems, community banks have made bold innovations such as offering joint guarantee loans and village-based credit lines.

According to Li Danyang, president of Hubei Daye Tailong Village Bank, most community banks make a credit assessment of a village as a whole and organize credit lines for all households in the village based on the assessment, excluding those with extremely weak repayment capacity. Villagers can obtain loans through joint guarantee arrangements.

“Offering credit lines to whole villages is an efficient way to get customers,” said Li, but he added that bank staff had to conduct thorough studies and face-to-face interviews to work out the repayment ability of villagers covered by the loans.

However, under such arrangements, “if a few households can’t make their repayments, it may leave the whole village overdue,” said Li Guifu, president of Zhongmou Zhengyin County Bank in Henan province.

Regulators make no exception for community banks regarding bad-loan requirements, Guo said. “No matter how community banks grow, they must follow industry rules to keep nonperforming loan ratios under 5%.”

With business limited to deposit and loan issuance, the main profit source for community banks is interest margins. However, as China gradually liberalizes interest rates, the gap between deposit and lending rates has been narrowing, leaving most community banks facing weakening profitability, according to Huang Yi, president of Sichuan Tianfu Bank.

According to Zhongmou Zhengyin’s Li, since community banks’ investment activity is under strict regulatory control, most banks have to put their capital in their founding banks to earn deposit interest, which sometimes barely covers their loan issuance costs.

Some banks have set aside extra capital to cushion bad-loan risks. For example, Daye Tailong’s 2016 provision coverage ratio stood at 994%, much higher than the 150% regulatory requirement, although the bank’s bad-loan ratio was only 0.4% that year.

Community banks’ profitability is closely linked to local economic conditions. Since 2012, the CBRC has asked commercial banks to set up more community banks in less-developed central and western regions, but banks are concerned about the business prospects.

“If a community bank is set up in an extremely poor region, there is no way to profit,” said a source from a commercial bank.

In late February, another village bank in Sichuan was involved in an interbank business dispute with a city commercial bank, Hengfeng Bank. Hengfeng sued Xuanhan Chengmin Village Bank for allegedly defaulting on 111 million yuan worth of bank acceptance bills. But the defendant argued that the seals used for the bill transaction agreement were fake. The case is still under investigation.

Community banks, usually with weaker risk control capacity and smaller capital size, are vulnerable if any risk occurs, the president of a community bank said.