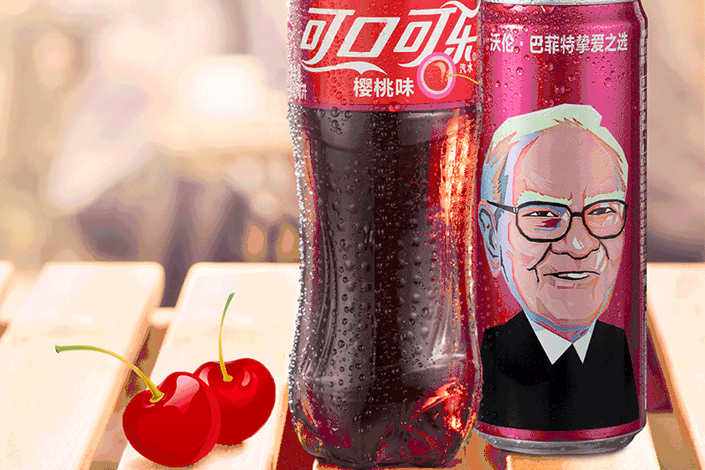 Warren Buffett’s face has been gracing limited-edition cans of Cherry Coke in China since the drink’s rollout in the country on March.10. Photo: The Coca-Cola Co.

(Beijing) — Chinese who are thirsty for a date with billionaire investor Warren Buffett need no longer pay extravagant sums for the privilege.

Local fans of the man known as “the Oracle of Omaha” may not be able to get much investment advice for just 3.5 yuan (51 U.S. cents) a pop. But at least they’ll be able to enjoy a limited meeting with Buffett, whose cartoon likeness has begun appearing on cans of Cherry Coca-Cola on sale in China, along with the words “The choice that Warren Buffett loves.”

The move is part of a promotion for the drink, which officially went on sale in China on March 10. Buffett is both an investor in The Coca-Cola Co. and also a well-known fan of the cherry-flavored drink, which marked the company’s first experiment with a flavored version of its trademark drink with the product’s launch in 1985.

“As we thought of the most creative ways to bring the great taste of Cherry Coke to China, we thought, ‘Who better to celebrate the launch of this special drink than its best-known fan?’” said Shelly Lin, Coca-Cola China’s marketing director, according to a post on the company’s website. “We honestly were surprised when Mr. Buffett agreed to the idea. But we’re thrilled, and he’s selling well.”

China is one of Coke’s largest markets, and Buffett is a big investor in the company. Buffett is also relatively well-known in the market, both for his overall investing prowess and also following his $230 million investment in 2008 in BYD Co. Ltd., a Chinese maker of traditional and new-energy cars.

Buffett’s broader fame in the region has made an annual lunch that he auctions for charity a favorite of Asian investors, especially from China. Of the five publicly named investors over the last 10 years who submitted winning bids for the famous “Power Lunch With Warren Buffett,” two have come from China. Most recently, online game entrepreneur Zhu Ye paid $2.35 million for the honor of lunching with Buffett in 2015.