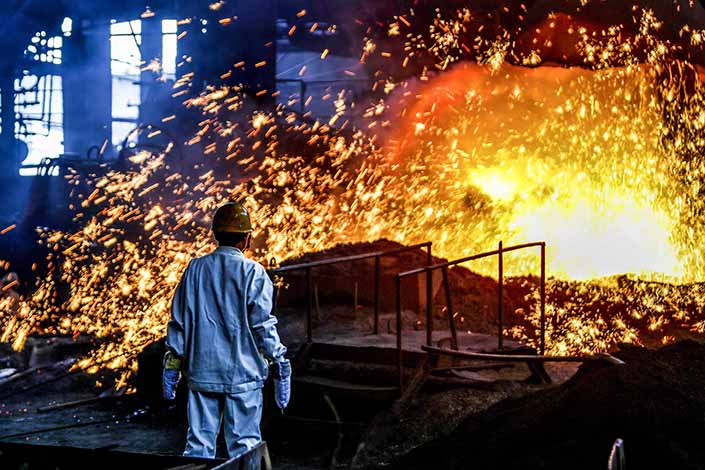 A worker oversees production at a steel plant in Lianyungang city, in eastern China’s Jiangsu province, on June 9, 2016. Cement and steel producers saw gains after the announcement of the Xiongan New Area. Photo:IC

(Beijing) — Dozens of China-listed companies saw their share prices soar when trading resumed Wednesday after a three-day break as investors bet on stocks they believe will benefit from a new economic zone.

Shares of BBMG Co. Ltd., a cement producer and property developer listed in Shanghai and based in Beijing, climbed 10% — the maximum allowed daily increase on mainland Chinese stock markets. Meanwhile, Beijing Shougang Co. Ltd., one of China’s largest steel makers, also saw its Shenzhen-listed shares rise by the daily limit — along with about 60 other firms.

Some of those companies are based in northern Hebei province, including Langfang Development Co. Ltd., Tangshan Jidong Cement Co. Ltd., and Xuanhua Construction Machinery Co. Ltd. Others have benefited from market expectations that the government stimulus to build a new development zone in the province will boost the regional economy.

China announced Saturday it will establish the Xiongan New Area in Hebei as part of the central government’s effort to advance the coordinated development of the Beijing-Tianjin-Hebei region, according to a report from the official Xinhua News Agency.

The Xiongan New Area will extend across Xiongxian, or Xiong county, about 130 km southwest of Beijing. The 19th “national new area” will ultimately cover 2,000 square kilometers and become a region of national significance, Xinhua said.


The area, part of a major economic strategy announced by President Xi Jinping, will be as important as the Shenzhen Special Economic Zone and the Shanghai Pudong New Area, which were established by then-national leaders Deng Xiaoping and Jiang Zemin respectively, Xinhua said.

Before markets opened on Wednesday, several publicly traded companies outlined the expected effect of the new economic zone on their respective businesses in stock exchange filings.

Xuanhua Construction Machinery said it had not undertaken any business in the area earmarked for the new economic zone, and since the State Council, China’s cabinet, had yet to roll out any detailed policies on its development, the company said the new plans will not affect its operations in the short term.

Tangshan Jidong Cement said in a stock exchange filing on Tuesday that the development of Xiongan New Area would drive up demand for cement and other construction materials, but given the lack of a detailed timeline and plan, there were uncertainties over its effect on the company’s business.