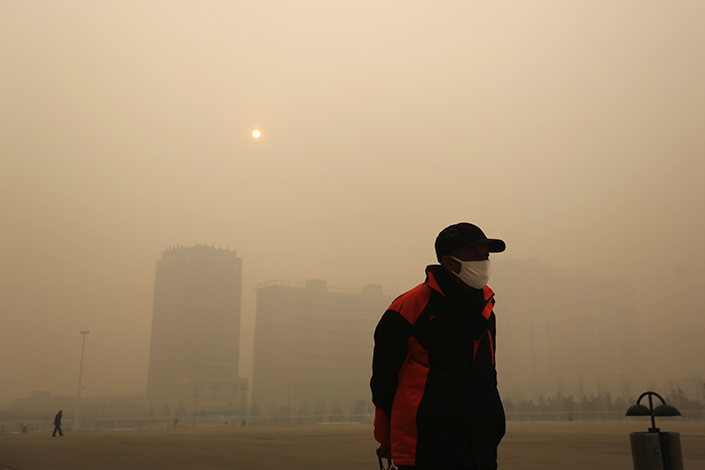 The Ministry of Environmental Protection checked 8,500 businesses in 18 of the worst-polluted northern cities — including Beijing, Tianjin and Shijiazhuang — from Feb. 15 to March 18. The inspections found that over 3,100 factories had altered real-time pollution data in the monitoring systems they were required to install by the government, the ministry said in a statement on Monday.

Inspectors from the ministry also uncovered 120 additional instances where emissions data were fabricated by manufacturers in the cities during spot checks on Tuesday in response to a heavy smog alert in the region, which later turned out to be a false alarm.

According to the revised environmental protection law, which came into effect in January 2015, manufacturers caught breaking their daily pollution limits will face heavy penalties based on the number of days of violations.

However, the problems exposed during the inspections show the obstacles Beijing faces in cleaning up the nation’s toxic air. These include local officials who target economic development over clear skies; state-owned enterprises that disrespect local environmental checks; and a new cottage industry of pollution consultants who specialize in falsifying emissions data.

Five local environmental protection officials in the central Chinese city of Xi’an were arrested in late October for stuffing cotton yarn into pipes in air-quality detectors, among other acts of sabotage, to manipulate air quality readings.

To clamp down on the widespread tampering of pollution monitoring equipment, the country’s top court and prosecutor’s office in December made it a criminal offense on par with destroying computer data, a crime that is punishable by up to 25 years in jail. Earlier, company executives who are directly held responsible for such violations could be detained for up to 15 days under the country’s Environmental Protection Law.

On Tuesday, inspectors found that Anyang Fengyuan New Materials Co., a porcelain manufacturer in Henan province, had a negative reading for sulfur dioxide emissions after altering their monitoring devices, the ministry said.

Police in Xingtai in the northern province of Hebei detained several executives of an unnamed local heating company who were found to have altered the company’s real-time emissions monitoring system to make pollution readings fall within the range allowed under the law, according to the ministry.

Shijiazhuang Yujing Glass Co. Ltd. in Hebei was found to have hired an unlicensed pollution monitoring device manufacturer that helped them alter the readings of nitrogen oxides, another major source of air pollution, to escape liability, the ministry said.

To tackle the problem of falsifying pollution data, regulators must improve oversight of manufacturers and reach out to the public for more information on violators, said Ruan Qingyuan from the Institute of Public & Environmental Affairs in Beijing.

Regulators should also come down hard on environmental technology firms and consulting companies that are profiting by helping manufacturers alter emissions data, said Ruan, head of the technology unit at the green advocacy group.

In its latest move to tackle chronic air pollution in northern China, the ministry published air quality rankings for 28 cities for the first three months of the year on Wednesday.

Despite frequently grabbing the headlines for its heavy smog, Beijing shared the top spot with Jining in the eastern province of Shandong for the cleanest air.

Shijiazhuang, the capital of Hebei and known for its electronics and pharmaceutical industries, came in at the bottom. The ministry did not reveal any details of the criteria used to gauge the level of air pollution in the cities from January to March.

The number of days when the air in northern China was heavily polluted rose to 19 days from 14 days in the previous quarter after a production curb on heavy industries like cement was lifted earlier this year, according to the ministry.