Drone Makers Dart Through Back Door in Bid for Quick IPO

By Li Liuxi and April Ma 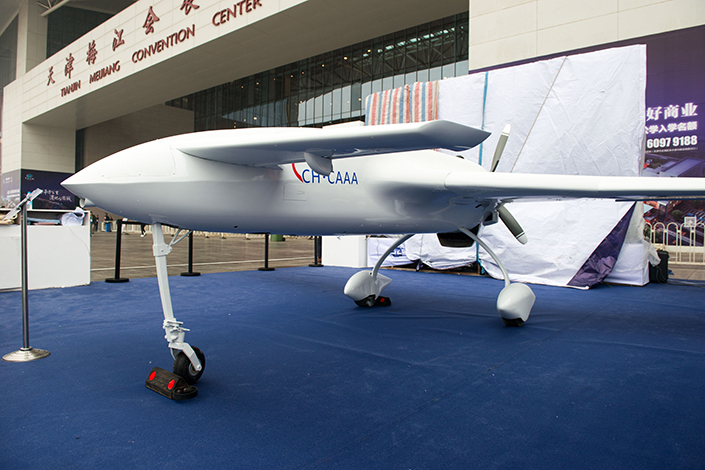 A Rainbow-3 drone is displayed in an exhibition in Tianjin on Oct.21, 2015. Caihong Drone Technology, manufacturer of the Rainbow series of reconnaisance drones, is being brought out by publicly listed Zhejiang Nanyang Technology Co. Ltd. Photo: IC

(Beijing) — Two drone-makers under the Chinese military will be going public via a backdoor listing — the latest attempt to inject vitality into a futuristic segment of a rigid state-controlled industry.

Zhejiang Nanyang Technology Co. Ltd., which makes electronic film for capacitors and is listed on the Shenzhen bourse, has won board approval for a full buyout of unmanned aerial vehicle (UAV) maker Caihong Drone Technology, according to a Nanyang announcement Friday.

Caihong is best known as the maker of the Rainbow series of reconnaissance drones.

Nanyang will also be acquiring an 84% stake in little-known armed-drone manufacturer Hangtian Shenzhou Aviation Ltd. The remaining 16% of Hangtian Shenzhou was purchased in April 2016 by engine maker Zongshen Power.

Nanyang will pay a combined 3.14 billion yuan ($455 million) in shares for ownership of the companies. Once the transaction is in place, the current father-and-son managers of Nanyang will hand over control to the military institute.

The move is designed to give the drone makers greater freedom from China’s state-controlled system, offering new avenues for fundraising and potentially sales to commercial entities.

In its public statement, Nanyang said the acquisition will help “eliminate systematic obstacles restricting the development of the formerly public institution” in order to transition into a market-oriented “new military corporation” with better means to receive funding from the private sector.

Deals aimed at rejuvenating sluggish state-owned structures with innovation and privatization don’t always bring equitable benefits to the acquiring company. Previous takeovers of drone-makers by marginally related enterprises have shown that the UAV sector is a tricky investment that is having trouble taking off.

A UAV affiliate of Shandong Mining Machinery Co., formed through a joint venture with a turbine laboratory under the Chinese Academy of Sciences, recorded a loss of 4.28 million yuan in 2016.

Lightbulb maker Cnlight’s forays into drone-making, which began in 2015 when it acquired a UAV startup, have become a heavy liability. The company blamed much of its 28% profit decline in 2016 to excessive research and development that has put Cnlight in the red by 3 million yuan.

Computer peripherals maker Rapoo called off inroads into consumer drone-making as its affiliate Xiro suffered a 40 million yuan loss in 2016, bogging down an otherwise strong 100% growth in profits.