By Zhang Xin and Liu Xiao 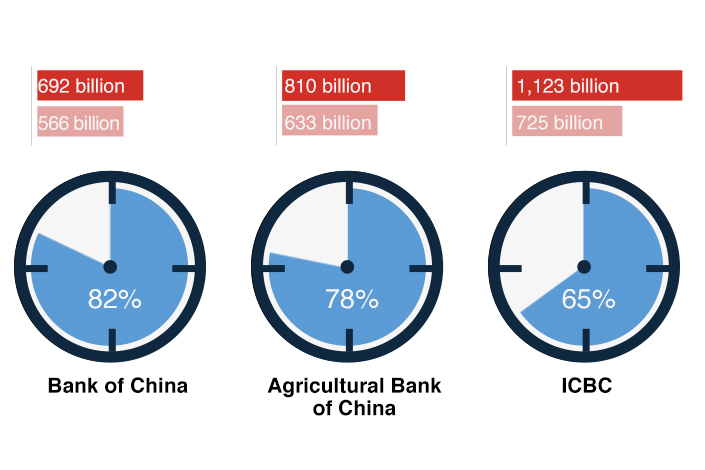 Such high levels of private-sector debt run against the government’s push for consumption-driven growth, as borrowers will need to pay off mortgages with money that could be spent to help the larger economy.

The percentage increase in new loans was derived from calculations made from the banks’ annual reports, released at the end of March.

The percentages suggest that the largest banks are dealing more in mortgages than the entire banking sector. Figures released in January by the People’s Bank of China said that 45% of all new loans last year went to mortgages. The government will try to reduce this number to 30%, Zhou Xuedong, director of the central bank’s business management department told Shanghai Securities News.

These measures included higher down-payment requirements and mortgage rates, enhanced scrutiny of purchases by divorcees, and toughened eligibility requirements for non-residents. Most recently, the banking regulator ordered banks to conduct internal reviews to assess risks, including those associated with mortgages.

Opinions are mixed over whether more money will pour into mortgages this year given the government’s continued efforts to ensure “houses are used for living rather than for speculation.”

One bank employee told Caixin that mortgages as a percentage of new loans will inevitably drop. “There are barely any more houses to sell in some first-tier cities,” said the bank employee, referring to major cities. “Demand for upgrading housing has eased as a result of higher down-payment requirements for second homes.”

Tang Chuanyao, a mortgage analyst with Rong360, told Caixin he expected the approval process for mortgages to become more rigorous. “While major cities will see a reduction in mortgages as a proportion of new loans, demand is likely to spill over to smaller cities, where credit requirements are more lax,” Tang said.