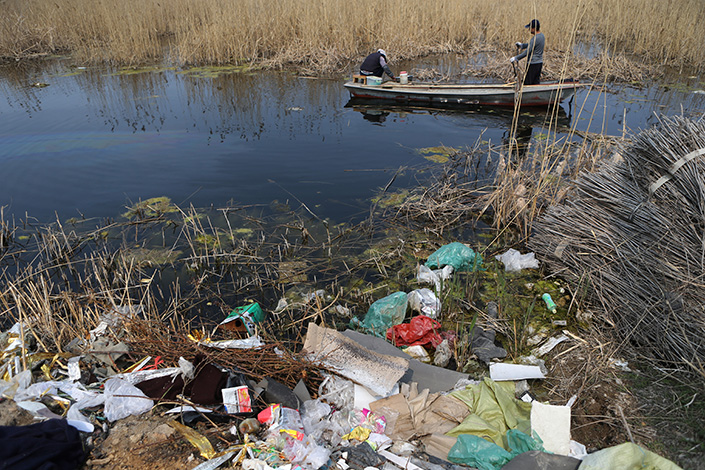 Baiyangdian lake in Anxin county, Xiongan district, Hebei province, China, on April 5, 2017. Once known as the kidneys of Northern China, Baiyangdian has been polluted by hundreds of small copper smelters and aluminum factories up stream dumping waste water into it for decades. Photo: IC

(Anxin County, Hebei) – Environmentalists have raised a red flag on plans to include most of Northern China’s largest wetland into the country’s newest economic zone, saying the fragile ecosystem could dry up if the project isn’t handled carefully.

Baiyangdian wetland in Hebei province was once known as “the kidneys of Northern China,” but its lakes have been polluted by hundreds of small copper smelters and aluminum factories up stream that have dumped waste water into it for decades.

Inhabitants living in the sparsely populated area are now relying on ground water, and urban planners fear that attempts to develop the region into a special economic zone to rival those in Shanghai and Shenzhen could lead to an influx of people that would deplete the water table and dry up the wetland.

Nearly 85% of Baiyangdian is located in Anxin County, one of the three rural counties in Hebei province chosen for the Xiongan New Area. The 100-square-kilometer zone is expected to eventually expand to 2,000 square kilometers — nearly three times the size of New York. Xiongan will be a key component of a massive “mega-region” developing around Beijing and neighboring Tianjin and Hebei, and will help ease the population pressure on the Chinese capital.

But the water in the lakes in the wetlands is so polluted that it can’t be used for drinking or agriculture. That means ground water is the only source of drinking water for nearly 100,000 people who live nearby and for many more in surrounding areas, said Chen He, an associate professor at Beijing Normal University’s School of Environment.

The three counties chosen for the new economic zone are now home to more than 1.3 million people. But Chen and other experts estimate that the area’s population would more than double and even surpass the five million mark in coming years.

“Once the economic zone is established, more underground water needs to be pumped out to meet the rising demand from a growing population,” Chen said. “The wetland area will dry up further as the water table subsides.”

Once a popular tourist spot, Baiyangdian includes 143 lakes connected by nine waterways. But most of the rivers have dried up after dams started mushrooming in the area. Over 100 reservoirs have been built on waterways feeding the lake and the wetland since 1958, according to government statistics.

Unlicensed tourist hotels, restaurants and other entertainment facilities have also popped up in violation of conservation laws over the past two decades, threatening the eco-system, said Liu Dongchen, who is in charge of wetland protection issues at the Anxin county government.

Acres of land with ditch reed that is crucial to the health of Baiyangdian have been turned into luxury villas for tourists, and golf courses have sprung up in other parts, he said.

There have been several instances of fish dying en mass because of the copper smelters and aluminum factories, Zhang Xiaomin, head of the Bian Village in Anxin county told Caixin. A Caixin reporter who visited the area found households were discharging sewage and dumping household waste into the lake.

All this meant that, according to standards set by the country’s water conservation law, the water in Baiyangdian was considered to be of the worst quality, not even suitable for use in agriculture, government documents viewed by Caixin show.

Authorities have been struggling to bring Baiyangdian back to life since 2014, closing some of the factories and pumping tons of water from nearby reservoirs into the wetland area each year, Zhou Zhenfeng, a deputy division head of Baoding’s water conservation bureau, told the Beijing News. However, the efforts failed to revive the damaged eco-system given prolonged droughts and the already depleted water table in the area, said Zhou.

This raises concerns as to whether the central government would be able to clean up the lake and revive the wetlands in time, before creating the special economic area.

The central government has not released details of how they plan to tackle any potential environmental problems from the new economic zone. But, officials involved in the planning of the zone say it will offer a “rare window of opportunity for a major cleanup” of the area.

“We will never build something at expense of the areas eco-system,” said Wu Hequan, a deputy head of a national expert’s committee for the coordinated development of the Beijing-Tianjin-Hebei area.

However, Wu and several other academics have so far only suggested cracking down on manufacturers dumping waste into the area and pushing for more water to be diverted to wetland, two solutions that haven’t had much effect so far.

But most of these facilities are left idle, according to a local farmer.