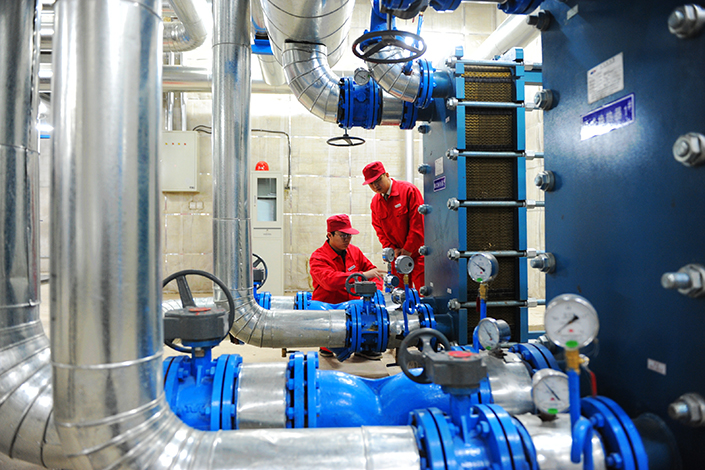 Sinopec Star Petroleum uses geothermal resources to provide heat for residents in Xiongxian, Hebei province, in January 2010. The creation of the Xiongan New Area, which includes Xiongxian, could mean that the other two counties in the newly announced economic zone also will get 100% of their heat from geothermal power. Photo: Visual China

(Xiongxian, Hebei province) — When Li Fuzeng and his 3-year-old granddaughter spent days lounging comfortably in a toasty apartment this winter, they never dreamed their hometown — and the source of the heat that made them so comfortable — would make global headlines come spring.

But that’s exactly what happened in Xiongxian, where Li’s young granddaughter spent typical winter days in short sleeves and eating ice cream as she padded around their apartment barefoot.

That quiet life was interrupted over the weekend when Xiongxian was named as one of three counties in Hebei province that will form the new Xiongan special economic zone, slated for major development to take pressure off nearby Beijing.

With only 390,000 residents, Xiongxian has been plucked from obscurity partly due to its unusual status as an area where all the heat comes from clean geothermal energy. That contrasts sharply with Beijing, about 110 km (70 miles) away, and most other cities in northern China that rely on coal for most of their winter heat.

Such coal burning is a major factor behind polluted air that has plagued Beijing and nearby cities for the last decade, and has made environmental protection a top priority for the central government under its current Five-Year Plan through 2020. Geothermal power could play a bigger role now with the rise of the Xiongan New Area, and the inclusion of the resource in China’s latest national economic development plan.

“Clean energy needs to be applied in smoggy areas as soon as possible, and northern China — where geothermal energy is abundant and easy to exploit — is such a case,” said Pang Zhonghe, director of the Institute of Geology and Geophysics at the Chinese Academy of Sciences.

Xiongxian is currently one of the few places in China where 100% of home heating comes from geothermal power. However, that area might be extended to the neighboring counties of Rongcheng and Anxin, which will form the new Xiongan zone, as reported by the official Xinhua News Agency on Saturday.

The area’s proximity to overcrowded Beijing, combined with other advantages like its geothermal resources, are leading some to predict it could be set for a rise like ones that transformed the southern city of Shenzhen and Shanghai’s Pudong district from backwaters to economic powerhouses in just a couple of decades.

Clean energy is a clear priority for the zone, with President Xi Jinping saying the area should first be a green and ecological area, according to Xinhua. That could point to further development of Xiongxian’s geothermal technology, providing a model of creative strategies for cleaning up the nation’s polluted air.

Xiongan’s transformation to a clean-heating hub is the result of a 20-year effort by state-run petrochemical giant China Petroleum & Chemical Corp., or Sinopec.

Naturally derived heat from the ground is relatively abundant in China, which is home to about 8% of global reserves, equal to the power generated by 460 billion tons of coal each year, according to the Chinese Renewable Energy Industries Association.

Despite that abundance, geothermal power accounted for only 0.5% of power generated from nonfossil fuels in China last year.

“Compared with solar and wind power, geothermal energy hasn’t been developed on a large scale because of the lack of government support, especially because there haven’t been any national subsidies,” said Wang Yanxin, deputy chief geologist of the new-energy institute of Sinopec’s Star Petroleum Ltd. subsidiary.

After Xiongan’s designation as a new special economic zone, Sinopec has determined it may not only extend the thermal heating system to the zone’s other two counties, but also try to establish 20 other coal-free towns by 2020.

Earlier the resource also got a boost when the National Development and Reform Commission (NDRC), China’s economic planner, mentioned guidelines for geothermal energy for the first time in its latest Five-Year Plan. That means the sector could eventually get state subsidies and triple the current volume of geothermal heating systems.

Despite the nation’s abundance of the resource, geothermal power in China has its limits. Unlike some other geothermal-rich countries like Iceland, where the resource generates a quarter of all electricity, China’s resources are too low-quality for such production.

That’s because geothermal power generally requires heat of 150 C or more for electricity generation, a level that most of China’s resources fail to meet. What’s more, the limited geothermal energy that is adequate for power production is often located too far below the earth’s surface for feasible exploitation.

One exception is the Tibet region, where more geothermal energy is used for power generation, according to the Chinese Academy of Sciences’ Pang. China installed the first geothermal power facilities in Tibet’s Yangbajing area in 1977, and the energy source now produces almost 90% of the electricity there, according to the NDRC.