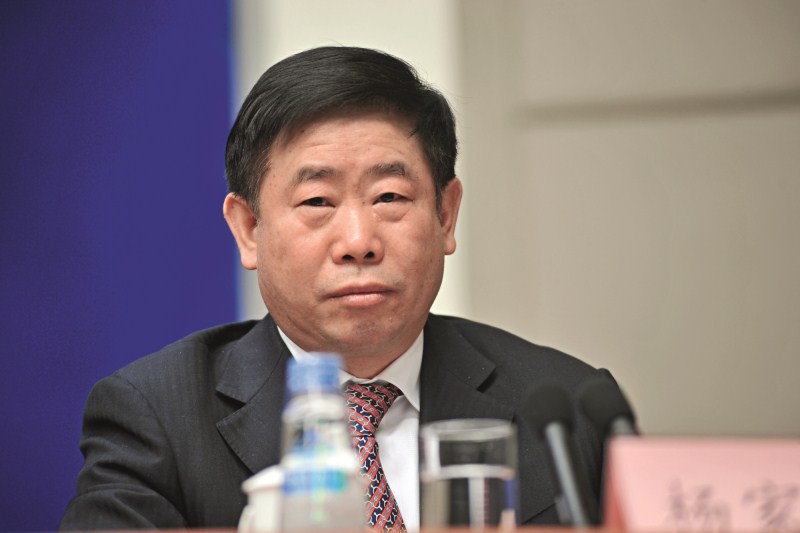 Yang Jiacai, the assistant chairman of the China Banking Regulatory Commission, has been probed since April 9. Photo: CFP

(Beijing) – A senior official of China’s top banking regulatory body has been placed under investigation for alleged links to a loan scandal involving the Bank of Communications in Wuhan, Hubei Province, sources close to the matter told Caixin.

Yang Jiacai, the assistant chairman of the China Banking Regulatory Commission (CBRC), has been probed since April 9, sources said. The investigation into Yang follows that of top insurance regulator Xiang Junbo.

Yang Jiacai’s wife and son are also being investigated, sources said. The CBRC didn’t reply to Caixin’s request on the matter.

Separate sources told Caixin that investigators targeted Yang Jiacai during a probe involving a loan scandal in Wuhan, which concerns Yang Dongping, the former chief risk officer of state-owned BoCom, China’s fifth-largest lender. Yang Dongping has been removed from his post and expelled from the party for “abusing his power to do favor for some private businesspeople in loan issuance,” according to a statement by the party’s anti-graft buster in February.

Yang Jiacai and Yang Dongping are old acquaintances in Hubei with “very good relations,” said a source close to the matter. As a Hubei native, 56-year-old Yang Jiacai has spent most of his career in the central province before 2005 when he was appointed to head the CBRC’s Anhui branch. Between 1997 and 2003, he was the deputy head of the central bank’s Hubei branch.

Speculation about Yang Jiacai has grown over the past week as he didn’t show up to work. Sources within the CBRC told Caixin that Yang been relieved of his duties since Apr.10.

Previously, Yang had been simultaneously in charge of several functions at the CBRC, including the general office, human resources, and the department of non-bank financial institutions regulation. These duties have been taken over by Vice Chairman Cao Yu, the sources said.

Several sources with knowledge of the investigation told Caixin that Yang’s wife, who has worked for a financial institution in Shanghai, is also under investigation for having a huge amount of money in her bank account from unknown sources.

Also under investigation is Yang’s son, Yang Hao, who is running a Hubei-based startup offering car wash services through a mobile app. Yang Hao is also an investor behind five companies in Wuhan and Shanghai, with business ranging from auto services to investment and technology.

Yang Jiacai last appeared at a CBRC new conference on April 7 to talk about the regulator’s supervisory tasks this year. He interacted comfortably with the reporters. “The CBRC is a government watchdog. The media is a market watchdog. We are all watchdogs,” he said.

Yang joined the CBRC in 2003 when the banking supervisory function was separated out of the central bank. He was promoted to assistant chairman in 2013.