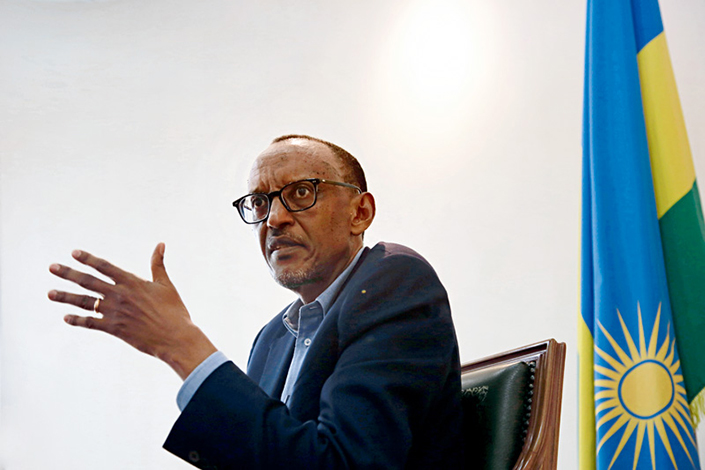 Chinese investment in Rwanda, concentrated in infrastructure projects, is playing a major role in the East African nation’s reconstruction after its 100-day genocide of 23 years ago.

China is now the second-largest source of foreign direct investment in Rwanda, behind only the European Union.

When Chinese President Xi Jinping and Rwandan President Paul Kagame met in Beijing last month, they reaffirmed their commitment to plans discussed at the 2016 Forum on China-Africa Cooperation held in Johannesburg, South Africa.

The Beijing meeting was the latest such affirmation in a decades-long relationship between China and Rwanda, and part of a larger picture of Chinese investment in Africa.

In 2009, the Export-Import Bank of China offered the Rwandan government a concessional loan of 219 million yuan to build Kigali’s public roads. This sum was followed by 720 million yuan in 2012, for the construction of a 66-kilometer road near Lake Kivu.

Today, there are 2,000-odd Chinese nationals living and working in Rwanda.

Many of the Chinese companies currently making their mark in Rwanda have relationships with the East African nation that pre-date the upheaval and trauma of the early 1990s.

The China Civil Engineering Construction Corp., a state-owned enterprise, sent its first representatives to Rwanda in 1983. One of the company’s first projects was the 30,000-capacity Amahoro Stadium, completed in 1986.

Its most recent project is Rwanda’s largest real-estate development to date, Vision City. Supported by a $150 million investment from the Rwanda Social Security Board, Vision City is set to include 4,500 residences ranging from villas to apartments, aimed at Rwanda’s nascent middle class.

When Caixin visited Vision City in late November, the development’s first phase, comprising 504 villas over 110,000 square meters, was near completion.

Power cuts are far from the greatest threat China Civil Engineering has faced in its 33 years in Rwanda. Company lore has it that CCE staff were in the cafeteria of their Kigali compound making jiaozi (a type of Chinese dumpling) in mid-1994 when they received a call from the Chinese embassy warning them about escalating communal violence.

“Evacuate quickly,” embassy staff on the other end of the line said. At that point in time, Kigali International Airport was under lockdown, and the Chinese team was rushed to neighboring Burundi, where they boarded a plane back to China.

An estimated 800,000 Rwandans, most of them from the minority Tutsi group, were killed in the genocide. In July 1994, the Tutsi-dominated Rwanda Patriotic Army, led by Kagame, seized Kigali, ending the genocide and years of unrest.

CCE employees only returned to Kigali years later, in 2008.

A sense of accomplishment

The Rwanda office of Hunan Road and Bridge Construction Group Co. Ltd. has a similar history. First established in the 1980s, it ceased operations in during the 1990-1993 civil war that preceded the genocide, only to return in 2014.

Hunan Road and Bridge is still working on its first project since its return to Rwanda, a 48-kilometer road linking Rwanda with its neighbors, Burundi and Congo-Kinshasa.

In terms of engineering, the project is simple. But opposition from local residents meant that Hunan Road and Bridge only received the necessary road construction permits from the Rwandan government five months behind schedule.

In August this year, Rwanda will be holding a presidential election, and its government has requested that Hunan Road and Bridge complete the Rwanda-Burundi road by May.

President Kagame is expected to run for a third term, after 98 percent of the electorate in a December 2015 referendum voted in favor of extending the number of presidential terms a single person can serve. Kagame has been president of Rwanda since 2000.

Hunan Road and Bridge is now working around the clock to complete the road in time. It’s a difficult process, Rwanda office director Zeng Kerong said, but also one that has given him a sense of accomplishment.

This sense of accomplishment was a frequently cited reason for staying in Rwanda, when Caixin interviewed Chinese nationals living in the country late last year.

All Chinese people living in Africa face the difficult choice between family and opportunity, Zhu said, pointing out with pride the dam his team built as part of the Karangazi-Rwangingo Marshland Development project.

Homesickness is inevitable, but getting to walk on roads he’s had a role in laying really makes him feel proud, Hunan Road and Bridge project manager Zhao Jinping said.

Over the past two decades, Rwanda has seen a significant increase foreign direct investment, from slightly more than $2.5 million in 1997 to $287 million in 2014, according to the International Monetary Fund.

In an interview with Caixin late last year, President Kagame emphasized that Rwanda’s government does not want to merely receive money, but rather hopes that the country will form reciprocal relationships with its international partners.

“When does Africa start a relationship with the rest of the world, including China, as partners?” Kagame asked, “As people who can do things together and benefit each other.”

In 2015, Rwanda introduced a new law aimed at promoting foreign investment, which relaxed many previous restrictions on investment, and abolished the $100,000 minimum investment requirement.

The World Bank’s annual Doing Business report, which measures the ease of doing business in 189 economies, shows that Rwanda has made a massive improvement from being ranked 158th in 2005 to 62nd in 2016.

Most of Rwanda’s Chinese residents who spoke to Caixin were positive about the prospects for Chinese businesses in Rwanda.

Even though the local government’s small budget means it’s common for companies to received delayed payment on infrastructure projects, Rwanda’s relative efficiency and low corruption give it a distinct advantage over its neighbors, Zeng Kerong said.

Wang Lei echoed Zeng’s comment, saying that Rwanda’s governance is “more than 20 years” ahead of nearby countries.

At the time, Li said, the pace of life was slower, and people dressed very differently, with many going barefoot on the streets.

Li and his compatriots at China Road and Bridge returned to China during the genocide. He returned in the late 1990s, and says he has felt significantly safer living in Rwanda since 2000.

Li is realistic about how much China Road and Bridge can achieve in Rwanda for now. The Rwanda office is the company’s smallest overseas branch, and its achievements will probably never surpass the Kenya or Tanzania offices, Li said.

Still, Li plans to stay on, and says he now considers himself a “Rwandan.”