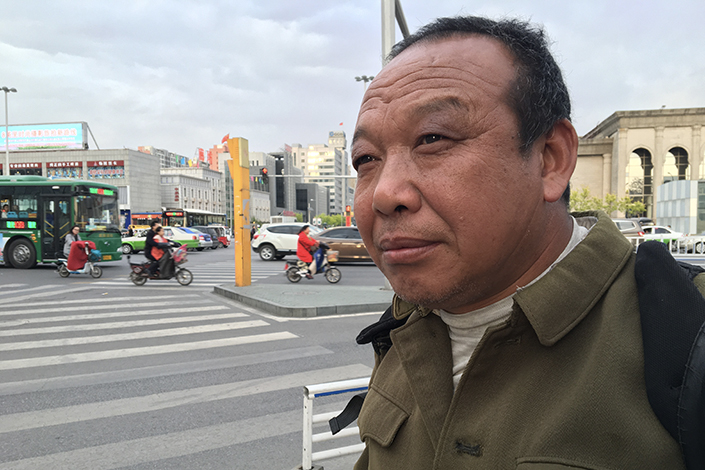 Feng Jun has been fighting a nine-year legal battle against two steel companies that allegedly dumped thousands of tons of toxic waste into the Baoqiu River in northern Hebei province. Photo: Caixin

(Langfang, Hebei province) — Last week’s decision by a Chinese court to accept a case in which a fish farmer has taken on two polluting steel companies and the local environmental authorities who allegedly allowed them to operate has become a watershed moment in the country’s environmental litigation.

The case will determine whether citizens can sue a government environmental authority for negligence or dereliction of duty that dates back to 2003, when the country’s Environmental Impact Assessment Law came into effect. Complainants now are required to file administrative lawsuits within five years.

Currently, the country’s Administrative Procedure Law says plaintiffs who have been adversely affected by a government decision can bring the responsible authority to court within a five-year period after a decision is announced. And this has been a major stumbling block for farmers like Feng Jun and hundreds of other people living in China’s so-called cancer villages, who sue local authorities for lax oversight only when a family member falls seriously ill after being exposed to toxic pollution for years.

Feng filed his first court case in 2008, demanding 1 million yuan ($145,000) in compensation to cover his daughters’ medical expenses, saying the girls fell ill because they drank polluted water. But both the Dachang County People’s Court and Langfang Intermediate People’s Court ruled against him that same year, saying he hadn’t provided sufficient evidence to establish such a link.

China has a long list of pollution lawsuits in which plaintiffs have been struggling to prove a strong correlation between exposure to environmental pollution and serious illnesses. But they face an uphill battle because doctors are usually afraid to come forward to testify against big polluting corporations. In some cases, state-run pollution-testing labs controlled by local environmental bureaus have tried to hush up contamination data so that government bodies will not be seen in an unfavorable light. Feng told Caixin that the doctors who said that water pollution may have contributed to his daughters’ leukemia refused to provide a written statement of their diagnosis or appear in court as witnesses. And this has deterred other families in the area, long labeled a “cancer village” by Chinese media, from coming forward to file lawsuits.


After his first attempt to sue the two steel makers failed in 2008 due to the lack of evidence, Feng tried again to get compensation in 2015. This time, he wanted to take to court the two local government environmental agencies in Dachang county and the city of Langfang for their alleged dereliction of duty. Feng said the two agencies had allowed the steel companies to set up shop without conducting a proper environmental impact assessment study in 2004 and 2006.

One of the environmental-impact assessment reports approved by the two bureaus said that there were no drinking-water sources within 500 meters from a steel factory, but the family’s well was just 30 meter away, said Feng, who was demanding 2 million yuan in compensation. The two environmental protection bureaus did not respond to Caixin’s request for an interview.

But unlike in the United States, getting to court in China is a slow process. Trial courts first need to evaluate the complainant’s evidence and accept a case before any hearings are held. And a court refused to accept Feng’s case until April 13 because the two government agencies had been arguing that they cannot be sued for a decision they made more than five years ago, the legal window given to citizens to challenge any government decisions.

But Feng’s lawyer, Li Jiang, said this five-year window to lodge administrative lawsuits against government environmental bureaus is too rigid because many people weren’t even aware of the 2003 law requiring environmental impact assessments for projects until other lawsuits drew attention to it in recent years. It takes years, even decades, before one can see the health and social impact of pollution in some cases, Li said.

Feng said he had “a fairly comfortable life” before the steel plants were set up, as he was earning 30,000 to 40,000 yuan a year from his fishpond.

The family’s fate took a turn for the worse after two steel plants were built 30 meters from Feng’s fishpond, one in 2001 and the other in 2006.

The two plants started discharging untreated wastewater into the Baoqiu River, which runs through dozens of villages, including Xiadian, according to several local residents interviewed by Caixin.

The two companies were ordered by the Ministry of Environmental Protection in 2013 to suspend operations pending a review after the ministry blacklisted them for severely polluting the river, according to a statement from the ministry. But the results of the review were never made public, and a Caixin reporter who visited the area found that the two companies have resumed operations. It is unclear whether they continue to discharge waste into the river, or when they restarted operations. Representatives of the two companies declined requests for interviews.

A cluster of steel mills and chemical and leather factories have mushroomed along the riverbank in the past two decades, and they have been dumping untreated industrial waste and garbage into the waterway, killing the fish and freshwater shrimp that once used to be a major part of the local diet, said Zuo Fengxiang, a local farmer.

Locals said that more than 30 people in the village with about 1,000 inhabitants were diagnosed with various cancers from 2005 to 2007. Caixin couldn’t independently verify the claim through hospital records or other official data. But villagers in Xiadian have been sending lists of names of the cancer patients to Chinese media for years after local officials failed to clean up the river. And this fits the pattern of “cancer villages,” where cancer rates are above average, that are mushrooming across China, according to environmentalists.

“China has at least 200 cancer villages due to severe water pollution,” Wang Hao, a researcher at the state-backed China Institute of Water Resources and Hydropower Research Institute, said at a forum hosted by Caijing Magazine in September 2013. This was one of the few instances where a government official has acknowledged the existence of such areas. Some small villages with about 1,000 inhabitants in Tianjin, which borders Hebei, have as many as 120 cancer patients, Wang said.

After the number of people diagnosed with leukemia in Xiadian started to rise in 2005, villagers complained to the local authority about the pollution in their area, Feng told Caixin.

But Dachang county’s Environmental Protection Bureau said at the time that samples taken from local waterways showed that levels of arsenic, a toxic chemical linked to leukemia, was below government standards in sources of drinking water in the area.

However, Feng said that he paid the county’s health authority to conduct another test, and the results were completely opposite. Those results showed that the level of arsenic in water from a 40-meter deep well next to his fishpond, where the family used to get its drinking water, was 2.4 times above the national standard, he said.

The factories close to Feng’s home were the only possible source of this water pollution, said Tian Jing, a project programmer at Beijing-based environmental advocacy group Natural University.

Chinese media have compared the uphill battle facing the villagers of Xiadian to that fought by residents in the world’s “most studied” cancer cluster in Toms River, New Jersey, where two superfund sites were located.

Toms River and surrounding Dover Township made headlines when a 1995 survey found 56 instances of childhood cancer in an area with a population of 76,000 over a period of 13 years, which was above the national average. But a five-year, $10 million U.S. government health study that followed did not conclusively link all of the unusually high levels of childhood cancer to the pollution from these landfill sites. However, 69 families received an undisclosed amount in compensation from three chemical plants in the area in an out-of-court settlement.

But unlike the families in Toms River — who received support from environmental advocacy groups, doctors and scientists and even the federal government — Feng and other villagers of Xiadian have been left to fight alone. And Feng is taking on the local government itself.

China’s Supreme People’s Court shifted the burden of proof in environmental pollution cases to the defendant in 2001, unlike in other civil cases, but many local courts still require victims to prove that they have sustained damages or injuries due to environmental causes. A 2014 revision to the country’s Environmental Protection Law allowed nongovernmental organizations (NGOs) and government prosecutors’ offices to sue those causing pollution, “ecological damage, and harming public interest.” This was going a step further than even the laws in the United States, where a plaintiff must have suffered a “specific, concrete injury that is actual or imminent” to sue for environmental damages. This opened the floodgates, with courts accepting 189 public interest environmental cases, of which 60% were brought by environmental NGOs in the past two years, according to data compiled by China Dialog, a news site focusing on green issues.

It is not clear what prompted the high court in Hebei to accept Feng’s case. Feng said that the decision was a good sign, but when asked about his chances of winning, he fell into a long silence.