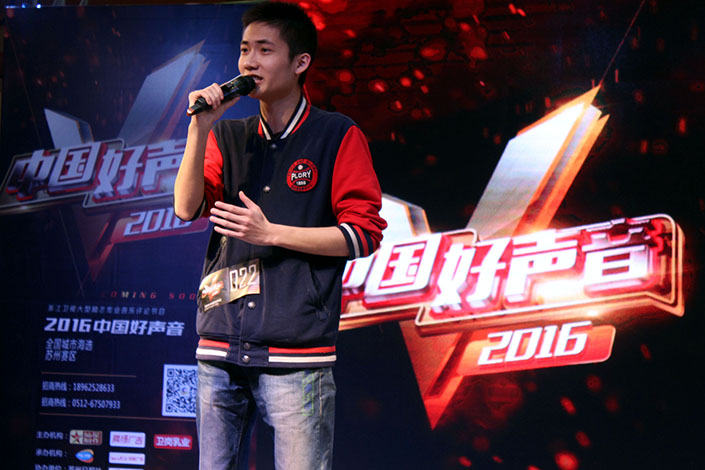 A contestant participates in "The Voice of China" TV show in Suzhou, Jiangsu province. Photo: IC

(Beijing) — The Chinese production house behind the hit reality-TV show The Voice of China and one of its partners have been taken to court by the Dutch creator of the hugely popular franchise for alleged trademark violations.

Representatives from Talpa Content BV, which owns the original format of the show, told the Chaoyang District Court in Beijing on Monday that Mengxiang Qiangyin Culture Media (Shanghai) Co. and the partner had used the trademark and logo from The Voice to conduct auditions for a season of the show that had been planned for the summer of 2016.

The partnership between Star China Media, which jointly owns Mengxiang Qiangyin with Talpa, had expired in January that year. Star China Media had the rights to the show’s name and logo until August, but the agreement included only the rights to promote past shows, not future ones, Talpa said.

Mengxiang Qiangyin and its partner, Beijing Zhengyi Tianxia, an agency overseeing the auditions, admitted to the allegations at a court hearing, but said they labeled the auditions as part of The Voice of China because they occurred while negotiations over contract renewal were taking place. Star China Media, the parent company of Mengxiang, said it had been in discussions with Talpa to renew the contract since August 2015, but negotiations broke down after Talpa increased franchise fees.

According to Talpa, Shanghai-based Star China Media was allowed to use the trademark, the words The Voice of China, and the show’s logo only until Aug. 1, 2016, to promote products or content from the first four seasons of the show produced from 2012 to 2015. The Voice of China, which aired on state-owned Zhejiang TV, was among the highest rated reality-TV shows in China, according to Nielsen-CC data, a Beijing-based data company.

Talpa Global and its new Chinese partner launched a string of legal cases against Star China, including one for the rights to the show’s Chinese title at the Hong Kong International Arbitration Center, which it won last month.

The Beijing Intellectual Property Rights Court also upheld an appeal by Talent Television & Film in July to bar Star China from producing a talent show bearing the Voice of China brand, which forced the latter to rename its new show Sing! China. Its ratings are far below the original version, Nielsen-CC data shows.

Chinese authorities have come down hard on intellectual property rights violators in recent years, and this has led to a flurry of cases filed by both foreign and local brands. The country has been inundated with copycat TV and film programs and knockoffs of famed international brands in the past.