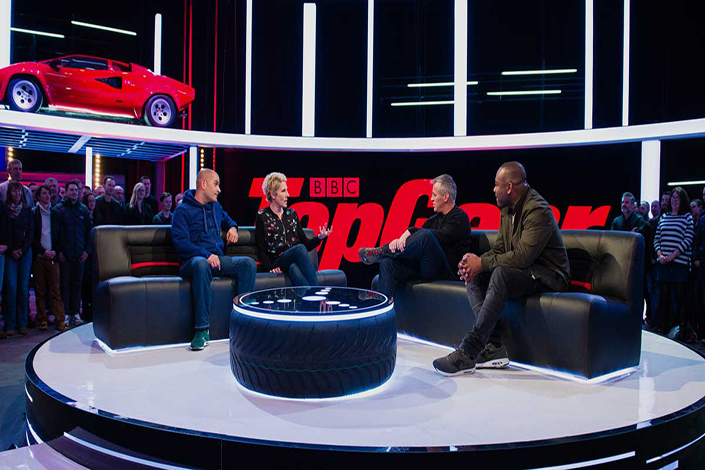 Shanghai Media Group will collaborate with the commercial arm of the BBC in the launch of China’s first TV channel for car enthusiasts, which will include "Top Gear," the world's most popular factual TV program. Above, "Top Gear" is recorded on March 21. Photo: "Top Gear"

Shanghai Media Group (SMG) will collaborate with the commercial arm of the BBC in the launch of China’s first TV channel for car enthusiasts, as car culture continues to develop in the world’s largest auto market.

Speaking at a joint news conference on the first day of Shanghai Auto Show, SMG subsidiary Shanghai Oriental Pearl Media Group Co. and BBC Worldwide said the channel’s most notable element will be the BBC’s Top Gear, the world’s most widely watched factual TV program, which has been available exclusively on BesTV platforms in China since March under a deal between SMG and the BBC.

Other car-related content from various providers will air on the channel, including car-racing series Deutsche Tourenwagen Masters (DTM), and World Rally Championship (WRC), a motorsport contest that attracts 1 billion viewers a year.

The channel will aim to be a broader resource for car enthusiasts, providing vehicle reviews, repair information and car modification advice, according to a report by China Securities News.

The popularity of cars in China is growing rapidly thanks to the country’s expanding middle class. Government figures showed that the number of cars surged from 49.8 million in 2006 to 194 million in 2016. China has led the world in vehicle production and sales for the last eight years.

However, China doesn’t yet have a nationwide community for car lovers. Most of the country’s automobile clubs are new and local. China’s largest car club, the China Automobile Association (CAA), has 900,000 members, while AAA, the North American federation of over 50 motor clubs, has 55.6 million members.

Unlike many Western car enthusiasts who join clubs to share their interest in cars, “the majority of our members join the CAA to make use of our road-rescue and car-insurance services,” said Chen Xinye, assistant to the chairman of CAA.

“A few Chinese people love cars out of true passion and professional car knowledge,” Chen added. “The majority of them love cars as proof of their success and wealth, and a way to gratify their vanity.”