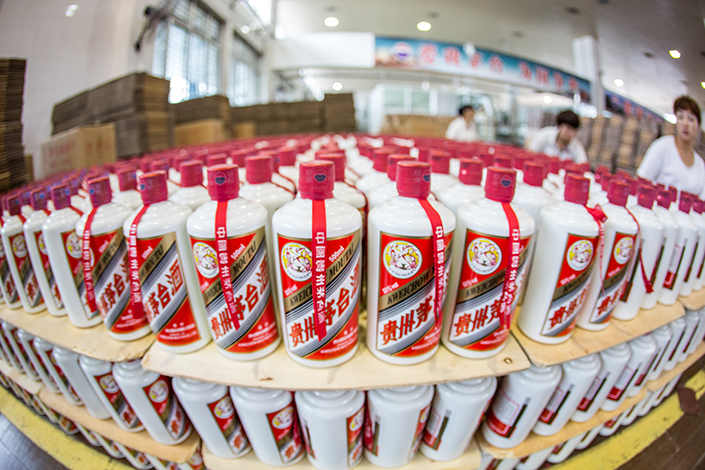 (Beijing) — The China growth story is making global titans of some of the nation’s hottest companies, which are challenging the likes of Facebook and JP Morgan Chase & Co. as leaders of their class.

Recent runups in their stocks powered internet leader Tencent and liquor giant Moutai past two major milestones last week, as the former became the world’s 10th-most-valuable company and the latter took the global crown for most valuable liquor maker.

Observers point out the frothy performance isn’t completely an illusion, since most Chinese companies now do nearly all their business at home and thus could reap huge new growth from going global. But at the same time, some also point out that stocks could be getting a little ahead of themselves at current levels since most companies are still relatively small in revenue terms compared with their global peers.

“China is the second-largest economy in the world and one of the world’s largest trading countries, so it is not a surprise to me,” well-known investor Jim Rogers told Caixin, commenting on the milestones for Tencent and Moutai. “Chinese companies will take many such ‘crowns’ in the next few years. Just wait until they do more business around the world as well as after China opens its markets.”

Both Tencent Holdings Ltd. and Kweichow Moutai Co. Ltd. reflect the broader rise of China companies over the last decade, banking on big growth stories that have led to even bigger valuations.

Tencent officially became one of the world’s 10 most-valuable companies last week when it displaced U.S. banking giant Wells Fargo & Co. for the spot. Just days later, Wells Fargo was overtaken again, this time when it was passed by Chinese e-commerce giant Alibaba Group Holding Ltd., according to a list compiled by Caixin on April 20 using Bloomberg data.

At its current levels, Tencent is now worth $281 billion, even though its annual revenue of $22 billion was just a quarter of the figure for Wells Fargo. But Tencent’s revenue grew a hefty 48% last year in China’s fast-evolving internet market, compared to only 3% growth for Wells Fargo in the mature U.S. banking space. That momentum has allowed Tencent to command a rich price-to-earnings (PE) ratio of 48, ahead of the 44 multiple for high-flying global peer Facebook Inc., which was the world’s fifth-most-valuable company on the list.

The picture was similar for Moutai, a brand whose name is synonymous with high-end liquor in China but means little or nothing to most people outside the country. A recent rally in the company’s stock sent it shooting past Diageo, owner of the Johnnie Walker and Smirnoff brands, to become the world’s most valuable liquor maker. With a value of $74 billion, Moutai is now the world’s 137th-biggest company, compared with Diageo’s $71 billion value, not far behind.

Moutai’s latest annual sales of $5.8 billion are just about half the level of Diageo’s. But while Diageo’s revenue actually contracted last year by 3% in the mature global spirits market, Moutai’s figure was up a strong 19%. Its big growth and future potential has brought Moutai a current PE ratio of 31, well ahead of Diageo’s 23.

China now, the world next?

A local media report noted that Moutai’s latest market value amounts to half the gross domestic product (GDP) for its home in Guizhou, a mountainous and relatively poor province in southwest China, reflecting the huge influence it already wields at home.

“If these companies are that gargantuan in earnings and valuation just on the domestic market, what’s going to happen if a Chinese company comes to dominate the world, like a Google or Facebook does?” said Gary Dvorchak, Asia director at BlueShirt Group, an investor relations adviser. “In the end, it is about growth potential, and both Tencent and Moutai still have a lot, even if it’s domestic only. You could argue the global leaders are already closer to saturating their markets. They have nowhere else to go.”

Tencent and Moutai posted their milestones as Chinese companies are claiming a growing place on the list of the world’s 100 most valuable companies. That list now includes 11 Chinese names, led by Tencent and Alibaba at Nos. 10 and 11. Nearly all other residents are big state-run companies, including the nation’s top four banks, energy giants PetroChina and Sinopec, leading insurer China Life, and China Mobile, the world’s largest wireless carrier.

The Chinese companies’ rich valuations have led some to say that their prices may be overinflated at the moment. On a recent visit to Beijing, Jim Rogers was quick to point out that many China-listed stocks are richly valued right now, since companies whose shares trade in both Hong Kong and China usually trade at higher multiples in the latter versus the former.

Leading bank ICBC trades at a 5.6 multiple in Hong Kong, where prices are determined by international investors. But it trades at a significantly higher 6.2 in China, which is largely closed to foreigners, even though investors in both markets are technically buying identical shares. Similarly, PetroChina’s Hong Kong shares now trade at a multiple of 116, compared with a much higher 183 across the border in Shanghai.

“The valuations are big, but right now some of these companies like Tencent or Alibaba are hardly dominant in the sense that Google or Facebook is,” Dvorchak said. “They’re still domestic companies. There’s no Chinese company yet taking over the world, but the size of these companies, just on their own market, shows the potential and the direction the industry is going over the next 20 to 30 years.”