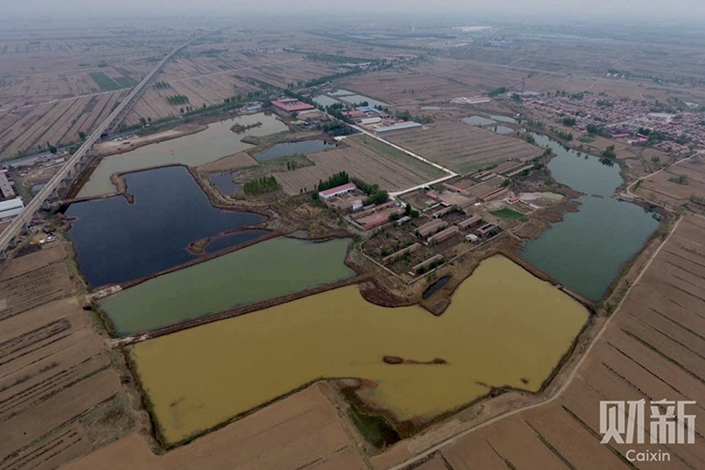 Six ponds next to a high-speed rail line running through the Tongjiazhuang village in Jinghai district, Tianjin. The six ponds are connected by dikes and cover an area of 150,000 square meters. Photo: Chen Weixi/Caixin

(Beijing) – The Ministry of Environmental Protection has, for the first time, confirmed that there were nearly 20 giant ponds where untreated wastewater had been dumped for years in Tianjin and Hebei province.

Two of them were located less than 100 km from the place picked to create China’s much-hyped new economic zone, the Xiongan New Area.

The rare public acknowledgement on Wednesday came a day after an environmental advocacy group reported that they had discovered three clusters of ponds with toxic water – two in Hebei and one in Tianjin - covering an area of 300,000 square meters in total, or the size of 42 soccer pitches.

In a post published Tuesday on its verified social media account on WeChat, Chongqing Liangjiang Voluntary Service Center, said it has located several abandoned wastewater storage ponds in Langfang in Hebei province and the port city of Tianjin late in March.

The ministry confirmed on Wednesday that its investigation team had found three toxic wastewater dumps in a rural town in the Jinghai District in Tianjin and two ponds containing acidic industrial wastewater in rural Dacheng County, in Langfang, in neighboring Hebei province.

The sites identified by the environmental group in Tianjin were among 18 abandoned wastewater dumping sites local authorities have known about since 2013 and cleanup work has been completed on 15 ponds by the end of 2016, the ministry said. And the local government in Hebei has already launched a cleanup effort, it added.

But authorities stopped short of disclosing who had dumped the toxic water there or when the problem started in a statement on Wednesday. Investigators sent by the ministry on April 19 were still assessing the potential damage to ground water resources and the ecosystem in the areas where the ponds were found, it said.

The report by the environmental group has been shared widely on Chinese social media and even picked-up by mainstream media, because it puts the spotlight on heavy pollution in Tianjin and Hebei -- two areas that have been chosen by the central government to build a megapolis along with Beijing, to house nearly 8% of the Chinese population.