By Hou Wen and April Ma 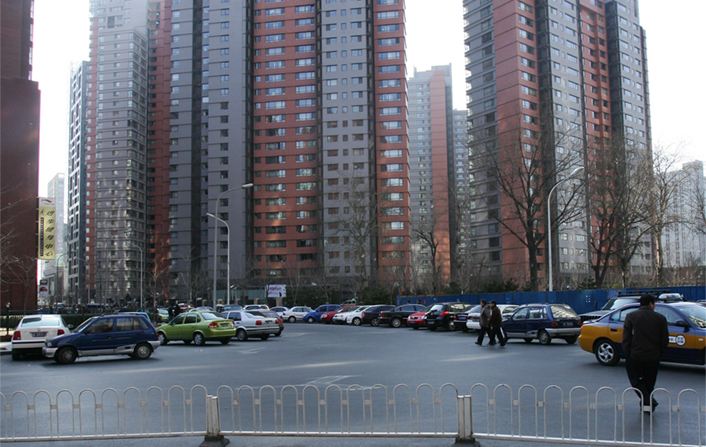 Chengdu is following the steps of Beijing and others closing in a real estate loophole for housing speculators. An office complex such as the one above in Beijing is often converted into private apartments. Photo: IC

Housing authorities in the central China city have stipulated strict floor plans for real estate projects built on land approved for commercial projects--chiefly offices and shops--making it difficult to convert them into private apartments, according to guidelines published on Friday.

The rules also prohibit land developers and real estate agents from advertising residential functions of such developments, barring the use of terms such as “commercial residence” and “serviced apartments.” Firms found describing office buildings as such will be marked down for misconduct in the city’s enterprise information system.

According to the regulations, buildings designated for commercial use should have hallways and public restrooms, as opposed to restrooms in each suite. Story height in commercial buildings should not exceed 4.6 meters, so that units cannot be remodeled into two-story loft apartments. Neither should there be balconies or natural gas, both considered bonuses for adapting offices into homes.

Chengdu, known as the home to the world's largest population of pandas, has become the fourth city to tighten regulations in commercial housing, or “altered-use property,” after Beijing, Shanghai and Guangzhou began curbing sales of offices to individuals as homes starting in January this year.

Housing prices rose 12% in Chengdu in 2016, making it one of the cities in China with the greatest jump in property values. The provincial capital of Sichuan was also the most popular destination for property shoppers, with a transaction volume of 30 million square meters within the year, according to a report by E-house, a Chinese real-estate consultancy.

However, Chengdu’s rules, which only apply to commercial property in the land approval process and have no power over those already in the market, and are lax in comparison to the rules Beijing rolled out against “altered-use properties” in late March.

Beijing banned all parties, except legally registered public institutions, companies and social organizations, from purchases of “altered-use property” in what is considered one of the most effective crackdowns on housing speculation.

Sales of “altered-use property” in the city nearly vanished in the three days following Beijing’s restrictions, plummeting by 99%, according to figures from Centaline property.

Beijing also ordered commercial banks to stop providing mortgages to individuals for commercial property and threatened to revoke the licenses of real estate agents involved in such deals.

Beijing also set a minimum floor area of 500 square meters for each unit, a size far beyond the finances of most individual home buyers。

“The restrictions in Chengdu are nowhere as strict as those in Beijing, and they have not set a limit on the minimum floor area of each suite,” said a real estate agent in Chengdu. “This seems to be an intentional loophole left in by the authorities. This will help ensure a steady inflow of property taxes,” they said.

Regulations against sales of “altered-use property” are targeting a loophole in the real estate market. These projects, with land-use rights of 40 to 50 years, less than the 70 years given to normal residential housing, became widely popular among buyers because of their lower prices and exemption from increasingly tight restrictions on private housing purchases, such as local residency and proof of tax and social security payments on their buyers.

The crackdown on commercial-use properties was inspired by Shanghai, said Yang Hongxu, director of research at E-House. “The fact the Chengdu is following suit may imply that gradually similar policies will spread to the rest of the nation,” Yang said.