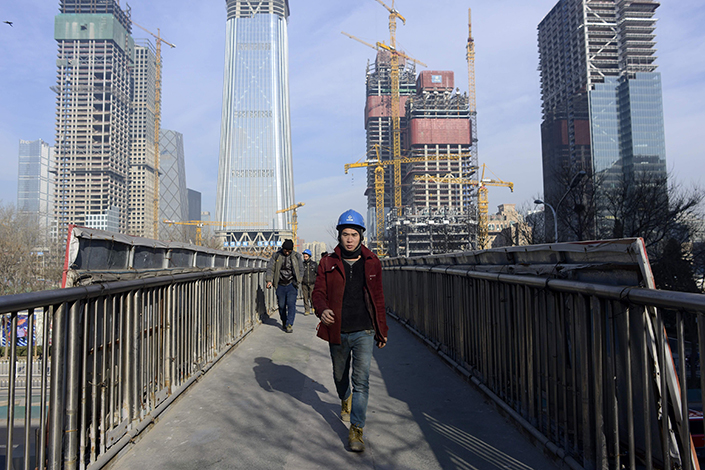 A workman crosses a bridge in Beijing on Dec. 16, 2016. Property investment in the Chinese capital is falling as government curbs on home purchases take effect. Photo: Visual China

(Beijing)—Beijing’s real-estate market has gone into a deep freeze, with investment in commercial property and sales of new homes plummeting in the first quarter, data from the city government show.

Investment in residential housing development was barely positive, up just 0.9% year on year to 31 billion yuan, accounting for almost half of total real-estate investment, the data showed. An official with Beijing Statistics Bureau told Caixin that the uptick was fueled largely by economy housing, a government-subsidized program to provide housing for low-income people.

In the first quarter, the city boosted investment in economy housing by 26% to 15.1 billion yuan, and new starts measured by floorspace jumped by 19%.

The decline in sales of new homes deepened in the first quarter, falling by 15.4% year on year and compared with a 8.2% drop in the first quarter of last year. The slump follows the government’s imposition of more purchase restrictions over the last half year to curb surging prices, including tighter scrutiny of eligibility rules such as tax payments and credit records, and higher down payment requirements.

Real-estate investment in Beijing could fall even further over the next few quarters and housing prices may start to drop as the impact of the government controls kicks in, Zhang Dawei, chief analyst at Centaline Property, a property agency and research firm, told Caixin.

The downturn in the commercial real-estate sector is the result of a combination of factors, analysts told Caixin.

Commercial development accounts for a relatively small part of overall real-estate investment in Beijing, so the data are more likely to be influenced by a few large projects, an official in the statistics bureau told Caixin. “One or two projects can make a significant difference to the investment figures,” she said.

A shortage of land resulted in a drop in total real estate investment in Beijing during the first quarter, which affected commercial development as well as residential, said Yan Yuejin, research director of E-House China R&D Institute.

“There wasn’t enough land and what there was didn’t come on stream early enough, and that’s reflected in the data,” he said.

The Beijing government has pledged to increase land supply to help bring down home prices. Earlier this month, it announced it would double the amount of land allocated for residential development this year to 12 million square meters, enough to build 300,000 units of housing, which it said would meet the city’s real housing needs in 2017.

Commercial real-estate investment could start to recover over the next few months, spurred by new construction on the fringes of the city. Tongzhou, a district on the eastern outskirts of Beijing has been earmarked for the relocation of some administrative departments currently in the center of the city. To the south, development is expected to take off in Daxing district, the site of a new international airport.

“The development of Xiongan New Area will make real-estate in the south part of Beijing more valuable and profitable,” said Yan from from E-House China.

The Xiongan New Area, launched in early April, is a new economic zone that will be a key component of a massive “mega-region” developing around Beijing and neighboring Tianjin and Hebei. Initially stretching over 100 square kilometers, it is expected to eventually expand to 2,000 square kilometers— nearly three times the size of New York.

The decline in real-estate investment in first-tier cities like Beijing is likely to become the norm over the long term as the urbanization process reaches its peak, according to Zhang from Centaline Property.