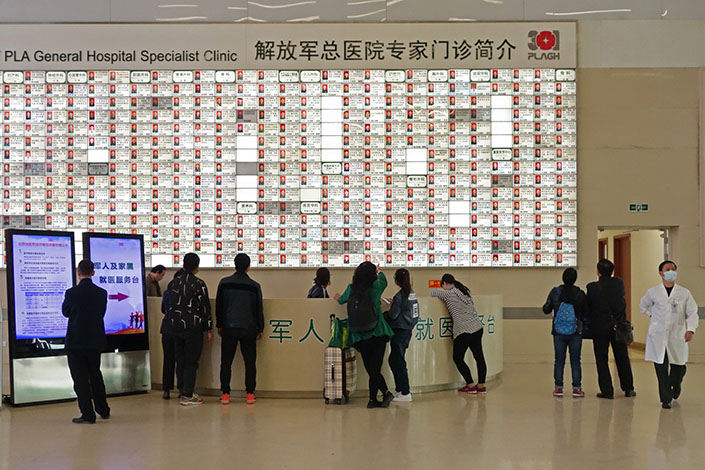 Patients queue in the outpatient department of the People's Liberation Army General Hospital in Beijing, on April 8, 2017. Beijing has been picked for the opening round of a sweeping reform project designed to address contentious issues affecting thousands of public hospitals in China. Photo: Visual China

Now, in hopes of ending this discontent, the National Health and Family Planning Commission has picked Beijing for the opening round of a sweeping reform project designed to address contentious issues besetting the thousands of public hospitals in China.

The project, which is expected to spread to dozens of other cities and provinces across the country this year, would “benefit the public while motivating doctors,” according to Fang Laiying, director of the Beijing Health and Family Planning Commission.

The commission launched the reform April 8 by telling five Beijing hospitals that they could no longer add a 15% surcharge to patient drug bills, but that they could raise doctor service fees without government permission. Other hospitals nationwide will be gradually phased in.

The two-pronged reform project is expected to reduce the amount of money hospitals can pocket through drug-price markups, while at the same time boosting hospital medical service revenues and doctor paychecks.

A new computer system that complements the reform has been rolled out in hopes of rendering hospital finances and management more transparent, particularly in the areas of drug pricing and medical services, according to Wen Jianmin, head surgeon at Wangjing Hospital in Beijing.

Most services requiring special medical expertise, such as surgical procedures, are now significantly more expensive in hospitals where the reform has already taken effect. For instance, the basic price of an appendix removal operation more than doubled to 560 yuan (US$ 81.4). And the per-day charge for a basic hospital bed jumped to 50 yuan from 28 yuan.

But drug prices have fallen. An elderly woman caring for bed-ridden husband at Beijing’s Xuanwu Hospital told Caixin the reform had cut her out-of-pocket costs for an anti-cholesterol medicine by about 10%. She now spends about 55 yuan per package of a brand-name drug.

Patients have long complained about hefty medical expenses they blamed on drug surcharges. Some claimed hospitals and doctors took advantage of their power to impose markups by prescribing expensive drugs, thus boosting revenues at the expense of patients.

Doctors have also been known to accept red envelopes from pharmaceutical company salespeople. Doctors in Shanghai and Changsha, for example, were caught on camera in December taking red envelopes from drug company representatives in exchange for promising to promote their products among patients.

Government support provides only about 10% of public hospital financing nationwide, according to Wang Zhen of the Chinese Academy of Social Sciences’ Center for Public Policy Research.

Most of the money needed to run a hospital comes from patient service charges and drug-related fees.

Under the reform, hospitals must consolidate patient fees for various doctor consultations and services with a single bill for all medical care. Single-service billing is already common at private clinics in China.

In addition, the reform has given hospital managers more power to independently set prices for 435 types of medical services, from surgeries to traditional Chinese medicines, according to the Beijing health commission. Prices are to reflect the skill level of relevant doctors and other health care providers, rather than follow government price guidelines.

Yet the new pricing rules were set by commission officials with little input from doctors working at Beijing’s 3,600 public hospitals and clinics, Wen said. As a result, it’s unclear whether the new price parameters will let hospitals charge patients properly according to actual service costs.

Administrators such as Zhang Jian, head of Beijing’s privately run Henghe Hospital, said the reform will only succeed if it addresses the under-funding problems plaguing China’s public hospitals.

Patients are also wondering how the reform will ultimately affect their finances.

Several hospital patients who spoke with Caixin said they fear hospitals may raise prices for in-patient care and other services in ways that offset the loss of drug surcharge revenues but, in the end, cost them more.

Sun Jianhong, who works as a human resources executive in Beijing and suffers from hypertension, said patients like her who only see a doctor occasionally to receive medications should benefit from the latest changes. But patients who need surgery would pay a price.

“I’m more concerned about how much I would have to pay if I need an operation or have to be hospitalized,” she said.