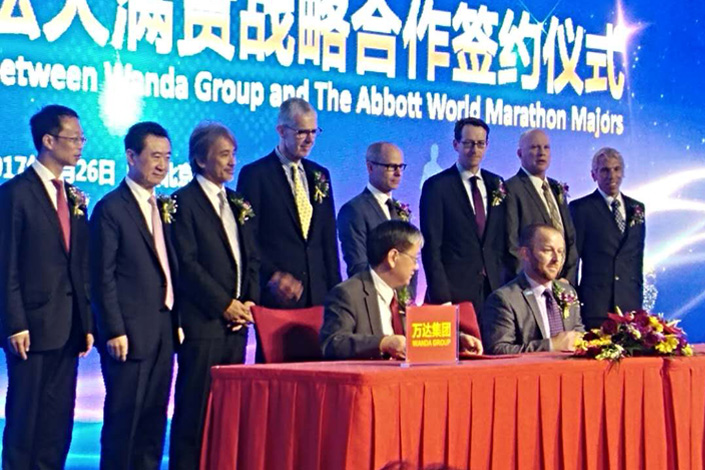 (Beijing) — Wanda Group said on Wednesday it will partner with an organization representing six of the world’s top marathons to develop similar races in three Asian cities over the next decade — part of its plan to develop the China sports market.

One of the three new location cities will be in China, under a partnership with Abbott World Marathon Majors, a global circuit of annual marathons in the cities of Boston, Chicago, New York, London, Berlin and Tokyo, according to an announcement by the two sides.

The other two locations under the partnership will be in other Asian countries besides China, though actual locations have yet to be determined, said Hugh Brasher, race director for London Marathon Ltd., one of WMM’s six member races.

A race in China will mark the first time for a WMM event in a developing country, though a specific Chinese city has yet to be identified.

“The earliest you could see any city (in China) taking place is 2019 or 2020,” Brasher said at a media briefing to announce the alliance. “2020 is most likely to be the earliest.”

The alliance is the latest between a major global sports group and Wanda, which is trying to diversify from its roots as a property developer into an entertainment company with assets in not only sports, but also movies and theme parks. The company already has relationships with the International Basketball Federation, International Skating Union and International Cycling Union (ICU).

Wanda is part of a crowded field of Chinese companies that have been forming partnerships and snapping up assets on the global sporting stage in the last three years. Like the latest marathon deal, many of Wanda’s tie-ups have been aimed at bringing foreign sports expertise back to China to help elevate the level of play and quality of events in a market with big potential.

Wanda announced its latest such tie-up late last year, when it unveiled a cycling tour in scenic Guangxi province in conjunction with the ICU, the world body for cycling. In 2015, the company also paid $1.2 billion for Infront Sports & Media, a Swiss sports marketing company.

That same year, Wanda paid $650 million for the organizer of the Ironman Triathlon event, and since then has held local competitions under the format in the Chinese cities of Hefei, Xiamen and Liuzhou.

China’s professional sports industry is expected to generate 1.6 trillion yuan ($232 billion) in annual revenue by 2025, as a flood of investment chases demand for more homegrown entertainment and answers the government’s call to improve the level of Chinese national teams, according to a report released last year by venture capital firm eCapital Corp.