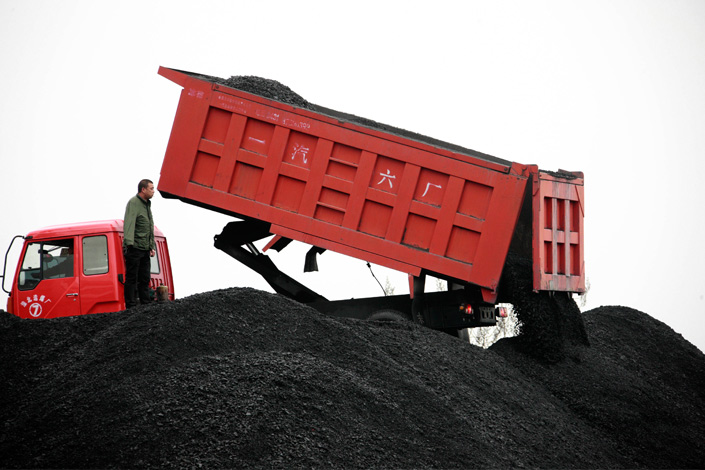 China’s industrial companies saw their combined earnings growth slow in March from the first two months of the year. Above, a truck unloads coal at a coking company in Huaibei, Anhui province, on March 29, 2013. Photo: Visual China

(Beijing) — China’s industrial companies saw their combined earnings growth slow in March, as the moderation in commodity prices contained further profit gains in upstream sectors such as energy and metals.

Profits of industrial enterprises increased by 23.8% year-on-year in March to 688.7 billion yuan ($100 billion), down from a gain of 31.5% in the January-February period, according to figures released Tuesday by the National Bureau of Statistics (NBS). Profits for the first quarter as a whole rose by 28.3% to 1.7 trillion yuan.

The deceleration may add to concerns over the sustainability of a rebound in China’s economic growth. The gross domestic product expanded by 6.9% in the first three months of the year after an increase of 6.8% in the fourth quarter of 2016 that was the first uptick in two years. NBS spokesman Mao Shengyong last week pointed to rapid industrial profit growth as one of the major supports for the strong momentum in the first quarter.

Profits have surged this year on the back of a recovery in raw material prices that has mainly benefited so-called upstream industries such as coal, oil and smelting. But the impact is now starting to taper off as gains in commodity prices have eased on a year-on-year basis, and in some cases the prices have fallen.

The five industries of coal mining and processing, oil and natural gas extraction, coking, processing of petroleum and processing of nuclear fuel, manufacturing of raw chemical materials and chemical products, and smelting and pressing of ferrous metals had a combined increase in net profit in March of 75.2 billion yuan, down from a 95 billion yuan jump in the January-February period, He Ping, an NBS statistician, wrote in an analysis on the statistics bureau’s website.

The decline was affected by “price changes” and a high comparison base last year, He said.

The S&P GSCI Energy Index, which tracks prices of fuel such as oil, averaged 173.1 in March, down from 182.6 in the January-February period.

He also attributed the slowdown in profits to the inability of companies to pass on all of their higher costs to their customers through price increases. The producer price index, which measures the prices of goods that domestic producers get for their products, rose by 7.6% year-on-year in March, while the producer purchasing price index jumped by 10.0%, NBS figures show.

Nevertheless, there were positive signs in the data — the combined revenue from companies’ principal business activities rose by 14.0% in the first quarter, better than the growth rate of 13.8% in the January-February period, indicating an improved performance in March. The profit margin on core business operations in the first quarter edged up to 6.13% from 5.92% in the first two months. Profit margins didn’t reach 6% at all in 2016, according to NBS data.

There was also an improvement in the number of days it took companies to be paid by customers, with the March figure standing at 38.6 days — 1.1 fewer days than the same time last year.