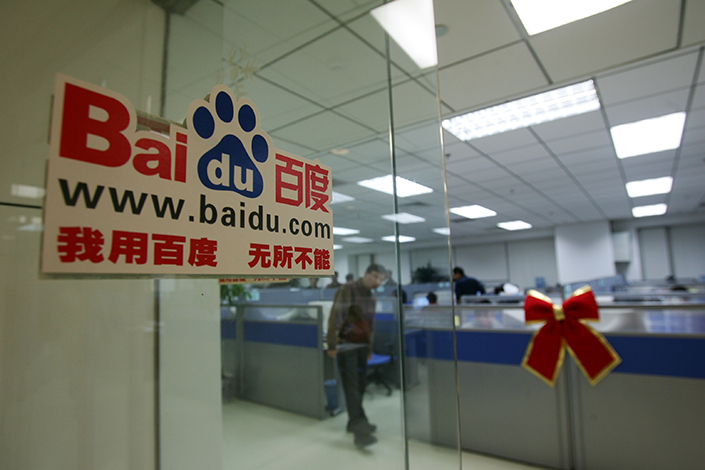 Baidu Inc. returned to revenue growth in in the first quarter of 2017, reversing a half-year of declines. Photo: IC

(Beijing) — Leading search engine Baidu Inc. said it returned to revenue growth in its latest quarterly report, reversing a half-year of declines, as it moved past an embarrassing and costly scandal involving misleading results for its core business.

Despite the return to revenue growth, Baidu’s profit fell for the quarter, as its money-losing video and Nuomi group-buying services weighed on its bottom line. The weak performance sparked a sell-off in Baidu’s U.S.-listed stock, which fell nearly 4% in after-hours trade after the results were announced on Thursday.

Baidu reported first-quarter revenue of 16.9 billion yuan ($2.45 billion), up 6.8% from a year earlier. Revenue had declined in the previous two quarters after a scandal involving misleading results on Baidu’s search service forced the company to make advertising on its pages more transparent and limit the number of ads per page.

It added it expects revenue to remain on a growth track in the current quarter, forecasting 20.5 billion yuan to 21 billion for the three months through June, representing an annual gain of about 13%.

“We continue to be on the path of rebuilding, with a clear focus on long-term sustainable growth,” Chief Financial Officer Jennifer Li said. “During the quarter, we worked to further align Baidu's business operations by folding (group buying site) Nuomi into our core business. Looking ahead, we will continue to drive higher operational efficiency and invest in (artificial intelligence) to elevate our core business.”

Baidu also announced that Li will be stepping down from her position to head the company’s new investment arm, Baidu Capital. No successor has been named yet.

Baidu’s shares plunged nearly 20% after the scandal broke out about a year ago involving a young cancer patient who received an ineffective treatment based on a highly ranked search result that turned out to be an advertisement. Its shares have made back much of that ground since then, though they are still trading about 4% below their highs just before the crisis.