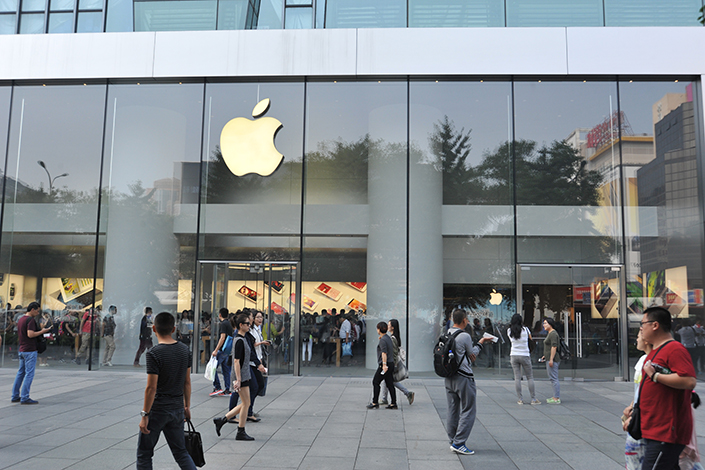 Apple Inc. said its China sales slipped 14% in its latest reporting quarter as it continued to struggle with competition, the lack of new products and a strong U.S. dollar. Above, customers flock to the Apple Store in the Xidan commercial area of Beijing on Sept. 20. Photo: Visual China

(Beijing) — Global high-tech giant Apple Inc. said its China sales slipped 14% in its latest reporting quarter, representing its only major global region in decline, as it continued to struggle with competition, the lack of new products and a strong U.S. dollar.

Apple’s Greater China sales drop for its second fiscal quarter through April 1 marked a slight deterioration from the previous quarter, when sales slid by 12%. But the most recent half-year period also marked an improvement from the previous two quarters, when Apple’s Greater China sales, which also include Hong Kong and Taiwan, fell by more than 30%.

In actual revenue terms, Apple posted $10.7 billion in Greater China revenue for its latest quarter, accounting for about a fifth of its total and making the region its third largest globally after the Americas and Europe, according to its results announced on Tuesday in the U.S.

The latest results mean that Greater China is now Apple’s only region posting declining sales on a year-on-year basis. Analysts believe the company could return to positive sales growth after it releases its next-generation iPhone 8, either late this year or in 2018. China’s overall smartphone market grew 19% in last year’s fourth quarter, with Apple finishing in fourth place with 11% share, according to IDC.

CEO Tim Cook, a frequent traveler to China, said Apple posted 27% revenue growth for sales from its own stores in China, while same-store sales in the country were up by a more modest 7%.

“Through the first two quarters of fiscal 2017, our year-over-year comparisons improved significantly over the last two quarters of fiscal 2016,” Cook said on a conference call to discuss the results. “Our March quarter results were in line with our expectations, and similar to the year-over-year performance we experienced in the December quarter. We continue to be very enthusiastic about our opportunity in China.”

Cook added that about a third of the decline in Greater China sales for the latest quarter was due to foreign exchange rates, as China’s currency continued to come under pressure amid a slowing economy. He added that weak tourism in Hong Kong was also a factor, as the destination has lost its attraction to some mainland Chinese travelers.

The decline wasn’t completely expected, and could eventually end when Apple rolls out its next model, which is typically followed by a big sales spike, said Bryan Ma, an analyst at data tracking firm IDC.

“Foreign exchange and Hong Kong issues aside, in the mainland we had already seen a sluggish response to the iPhone 7, in part because it didn’t look that different from iPhone 6, but also because of people waiting for iPhone 8. Apple's position should be much better after that launches,” he said.

Apple is also coming under growing pressure from a field of domestic Chinese brands that are trying to take a bigger share of their home market. While most of those are focused on the middle to lower end, a notable exception is Huawei Technologies Co. Ltd., which is making inroads into the premium market now dominated by Apple and Samsung Electronics.