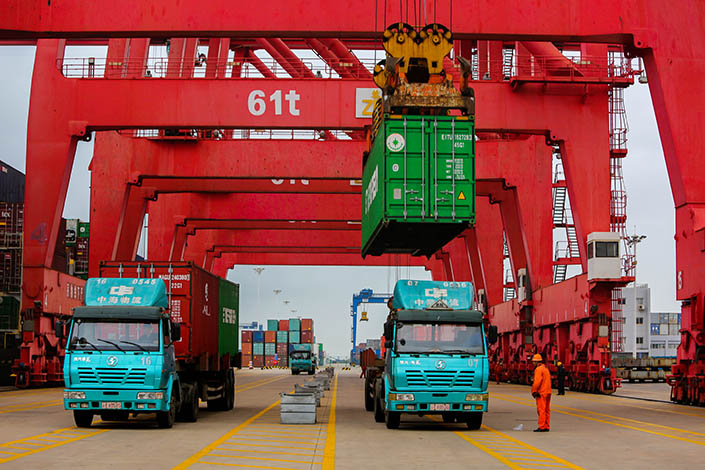 Huochebang is being rewarded for shaking up a fragmented trucking industry composed mostly of independent contractors, which is still responsible for carrying more than 75% of the nation’s commercial cargo. The Guizhou-based internet dispatcher service — like its chief rival, Shanghai Xiwei Information Consultation Co. Ltd., which is known as Yunmanman — said it is helping China’s 5 million truck drivers save more than 60 billion yuan a year in fuel costs by identifying more-efficient routes and making sure drivers don’t run out of fuel en route.

The company has also set its sights beyond cargo dispatch, aiming to provide financial services, which have a much higher markup. By distributing over 1 million cards that track mileage and toll payments, Huochebang is accumulating data that can be used to sketch out a driver’s credit history, which the dispatcher can reference when it gives loans.

Yunmanman, which has operated a nearly identical online dispatch business valued at $1 billion since August, is a tough competitor. It has backing from Sequoia Capital China, Lightspeed Venture Partners, and Jack Ma’s Yunfeng Capital. It is due to complete another $100 million funding, the company said in December.

The other investor in Huochebang’s latest round is Hong Kong-based All-Stars Investments Ltd., which is doubling down on its former bet in the firm with confidence bolstered by the 20 billion yuan revenue stream the toll collecting services are already bringing in.

Formed in September, Baidu Capital aims to find and invest in future players in China’s technology realm, especially those specializing in virtual reality, augmented reality, and artificial intelligence, which may play well with Baidu’s own inroads into autonomous driving. The venture capital arm has already invested in homegrown electric vehicle startup Nio, valued at 20 billion yuan after recent funding from Baidu Capital and Tencent Holdings Ltd., according to reports.

Baidu Capital is joining the ranks of Tencent, Hillhouse Capital Group, DCM China, and International Financial Corp. in backing the logistics startup, which is soon to close another round of investment.