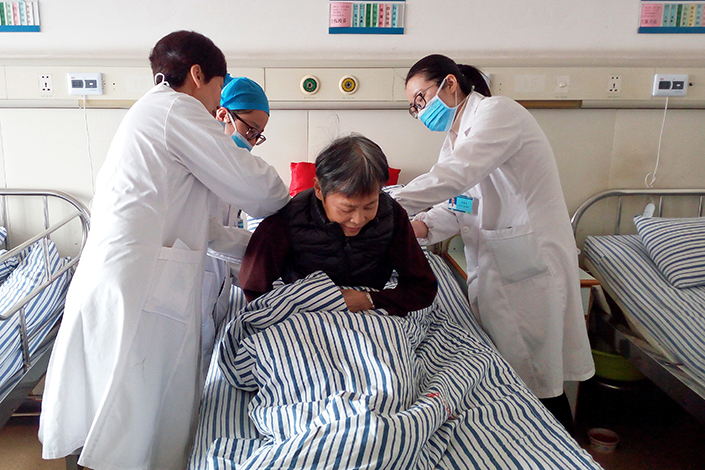 New Chinese government guidelines say that all public hospitals by September must stop adding medicine surcharges to patients’ bills, and they cannot raise fees by more than 10% this year. Above, medical staff attend to a patient in a hospital in Jiaxing, Zhejiang province, on March 29. Photo: Visual China

(Beijing) — China will launch a nationwide reform of its public hospitals this year, aiming to stem the tide of complaints from patients about steep health care costs.

All public hospitals by September must stop adding medicine surcharges to patients’ bills, and they cannot raise fees by more than 10% this year, according to joint guidelines published Tuesday by seven government authorities, including the National Health and Family Planning Commission (NHFPC) and the National Development and Reform Commission.

The move comes after Beijing rolled out a pilot reform program within the municipality in April, scrapping surcharges on drug and consultation fees.

China has allowed hospitals to add surcharges of up to 15% on drug bills since 2006, but some patients have claimed hospitals and doctors have abused this right by prescribing expensive drugs, thus boosting revenues at the expense of patients.

Total out-of-pocket spending by Chinese patients rose to 965.5 billion yuan ($140 billion) in 2012 from 587.6 billion yuan in 2008, according to the Medical Reform Bluebook published by the Chinese Academy of Social Sciences.

The latest reforms, which cover all drugs except prepared traditional Chinese medicine, will benefit patients, but they will put pressure on hospitals and doctors whose income might decrease.

To address this problem, Beijing will still allow hospitals to charge some money for consultations and other services, ranging from 20 to 100 yuan.

But the national guidelines don’t address the issue yet, and require all provincial and city governments to submit hospital-fee growth targets for the year to the NHFPC by May 15.