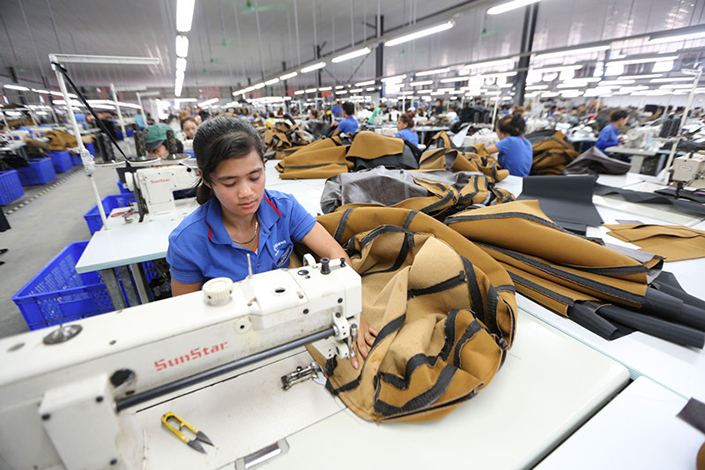 Dai Yue’e was so eager to win the trust of Cambodian farmers whose land had been targeted for expropriation near the town of Sihanoukville that she set aside her electronic device with satellite navigation and picked up a ruler.

Then, with ruler in hand, Dai waded through weed-tangled fields, marking off every farmer's plot, meter by meter. Eventually, her diligent efforts back in 2007 laid the groundwork for a successful land buyout and construction of a huge manufacturing complex.

“We measured some plots more than three times until the local farmers agreed the measurements were fair,” Dai told Caixin during a recent interview at the Sihanoukville Special Economic Zone (SSEZ) in southwestern Cambodia.

Today, the 11-square-kilometer SSEZ is Cambodia’s largest special economic zone. It supports more than 100 companies including manufacturers as a hallmark of Chinese-Cambodian cooperation and a model for similar initiatives worldwide pegged to China's massive Belt and Road initiative.

Belt and Road has been likened to the post-World War II Marshall Plan through which the United States financed the rebuilding of Western Europe. It's also seen as a way for China to win diplomatic influence and for Chinese companies to increase market share abroad.

The initiative's accomplishments and future path will be discussed this weekend when representatives from more than 130 countries gather for the first Belt and Road Summit hosted by the Chinese government in Beijing.

Dai, who serves as SSEZ vice chairman, will be closely watching as a Cambodian delegation led by Prime Minister Hun Sen attends the summit for discussions against the backdrop of the Sihanoukville success story.

China’s Ministry of Commerce said Wednesday that the SSEZ has become an important textile manufacturing base, providing more than 50% of the Sihanoukville area's economic growth and creating 17,000, local jobs.

Dai went to Cambodia to negotiate with farmers as an employee of Hongdou Group, a private company based in the Jiangsu province city of Wuxi that manufactures textiles, tires and pharmaceuticals.

Today, SSEZ is jointly operated by Hongdou and the Cambodia International Investment Development Group Co. On several occasions through the years, the zone has been hailed by Prime Minister Sen as "a symbol of Cambodia-China friendship."

Hongdou won a Chinese government tender process for access to SSEZ, which was one of eight "foreign economic trade cooperation zones" approved in 2006 by China’s Ministry of Commerce (MOFCOM) and host countries including Pakistan and Thailand.

Since then, MOFCOM has spearheaded the construction of 77 zones in 36 countries, ministry spokesperson Sun Jiwen told reporters April 13. Sun called these zones "shining pearls" of the Belt and Road initiative, noting that together they created about 177,000 jobs and generated more than $1.07 billion in tax revenues to host countries over the past decade.

Chinese companies looking for overseas manufacturing sites have been drawn to Cambodia by its stable political climate, low labor costs and "similarity to Chinese culture," according to SSEZ Chairman Chen Jiangang.

These companies have also enjoyed Cambodian government tax breaks and other preferential treatment. Companies in the SSEZ can operate for up to nine years tax-free and can be exempted from import-export duties. They also benefit from a streamlined customs clearance system for companies inside the zone.

Moreover, by manufacturing in Cambodia, Chinese companies can more easily and inexpensively export goods to countries that impose duties and/or import quotas on China-made goods.

Chinese companies with factories overseas are now on the front lines of a soft power offensive that China has accelerated through Belt and Road, Chen said.

As a standard bearer for Belt and Road, Chen envisions a bright future for SSEZ and Sihanoukville. For example, he foresees an urban metropolis with residential areas, schools, shopping malls and hospitals -- all revolving around SSEZ. And while the zone now has 109 companies, he hopes it will ultimately support 300, with up to 100,000 workers.

More than 20,000 Sihanoukville-area residents have already graduated from an SSEZ training center operated by Hongdou and China's Wuxi Business Vocational and Technical College offering marketing, accounting, business management, Chinese language and English courses. The center is slated to evolve into a full-fledged university.

Dai said workers who are bilingual normally warn higher wages in the SSEZ, which encourages Cambodians to learn Chinese. A 21-year-old worker who adopted the Chinese name Huang Laiyin told Caixin that she likes her job at an SSEZ wig factory because it gives her financial freedom.

The woman, who received five years of schooling before starting to work for the Chinese-owned company called Rebecca Wigs, speaks fluent Chinese and makes about $300 a month, nearly twice the nation's minimum wage for textile industry workers.

Sihanoukville has the potential to become a Cambodian version of Shenzhen, a manufacturing city in southern China that grew rapidly from small beginnings after it was designated a free trade zone in 1980. The city's population exploded from around 30,000 to today's 12 million.

When SSEZ opened, no airline offered a direct flight between Sihanoukville and any city in China. Now, several direct flights every week connect the Cambodian city with Kunming, Tianjin, Xi’an and other Chinese cities.

Chen said the SSEZ has set aside one square kilometer of land in the zone for new apartments, shops, hospitals, training centers and other facilities. Construction projects are expected to begin this year.

Dai’s only complaint about the SSEZ operation is that companies inside the zone must endure relatively high credit costs as there are too few Chinese financial institutions from which to borrow.

Nevertheless, business leaders such as Rebecca Wigs' Cambodian branch General Manager Zhang Xiaolei, whose plant was among the first in the SSEZ, are upbeat about Sihanoukville's future.

“If development continues at this pace over the next five years," Zhang said, "we will see massive changes in Sihanoukville.”