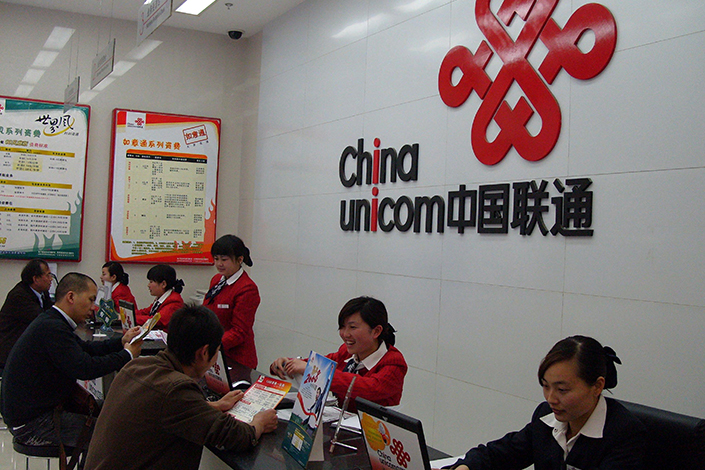 China Unicom has disciplined 73 employees in Shaanxi province who were found to have falsified reports on new business. Photo: IC

(Beijing) – China Unicom, the nation’s second-largest wireless carrier, has disciplined 73 employees in Shaanxi province after discovering widespread falsification of new business to inflate revenue from their areas, according to multiple company sources.

An internal investigation by China United Network Communications Group Co. Ltd. determined the falsification in the north-central province was systemic, reaching up to the highest levels of management in individual cities where the fraud occurred, the sources told Caixin. Much of the investigation was detailed in an internal memo, which included reflection on why such massive internal data falsification had occurred, they added.

Over a five-year period, Unicom’s Shaanxi unit reported 5 billion yuan ($726 million) in revenue, of which 1.8 billion yuan — or about a third — was faked, the sources said, citing an internal message from CEO Wang Xiaochu.

Most of the fraud occurred in areas outside of Xi’an, the provincial capital. The most egregious offenders included the cities of Tongchuan, Yulin and Hanzhong, according to the report, which labeled the problem a “systemic falsification of business data.”

“Some former top representatives and high officials of Shaanxi Unicom have ignored the law and blindly pursued big growth, giving out unrealistic budgets and goals and ways to achieve those. This has been a major reason for the falsification of data,” Unicom said in the internal report, reflecting on the situation.

The various employees have received a range of severe punishments, including removal from office, administrative warnings and deductions from performance pay.

Shares of Unicom’s Hong Kong-listed unit, China Unicom Hong Kong Ltd. were down 0.4% late in the Wednesday trading day. The company previously reported its revenue fell 1% in 2016 to 274.2 billion yuan, while its profit tumbled 94% to 630 million yuan.

Word of the case comes just four months after an even larger similar one, which saw northeast China’s Liaoning province admit that three years of recent economic data were inflated by about 20% from 2011 to 2014.

Observers say the problem has existed for years, in part because it was widely tolerated as officials looked for ways to meet aggressive growth targets. But recent actions, including the Liaoning case, have indicated the central government is trying to clamp down on the practice.