By Li Rongde and Zheng Danmei 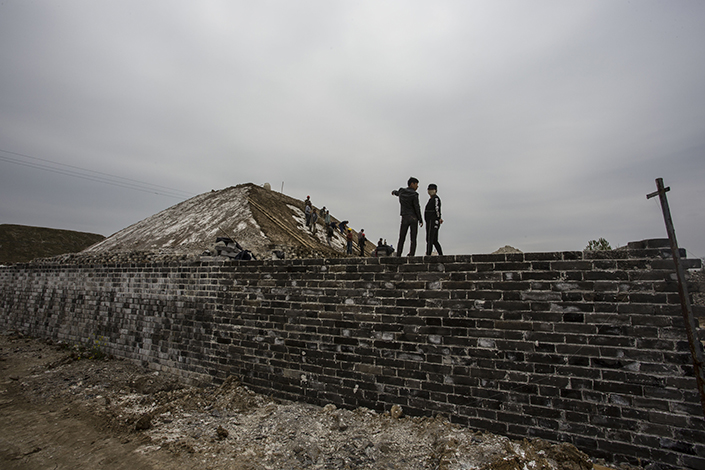 (Beijing) — Cultural authorities have suspended conservation work at a major heritage site in Anhui province after workers were discovered using “barbarian methods” that had harmed the 600-year-old relics.

The site in Anhui’s Fengyang county known as “Zhongdu,” or the “Central Capital,” dates back to the Ming Dynasty (1368-1644). Zhongdu was an attempt by the first emperor of the Ming dynasty, Zhu Yuanzhang, to build a new capital in his hometown. The undertaking was never completed, but the grand city — with palaces akin to the Forbidden City — served as the model for subsequent imperial capitals built in Nanjing and Beijing, according to historians.

But conservation work on the site spanning 280 acres came to an abrupt halt on Wednesday. “Investigators found that conservation teams at the site were using barbarian methods, including the improper use of electric drills,” the Anhui Provincial Culture Heritage Bureau said in a statement released the same day.

The investigation was prompted by a war of words between the historian who first shed light on the damage caused by the restoration teams, and the Fengyang county government, which downplayed the situation.

A post by Zhang Hongjie, a historian and a blogger in Beijing, said after a tour of the site on Sunday that workers were using electric drills to remove old bricks and laying new ones in their place. “This amounts to replacing real heritage with fake,” he wrote. “It’s not conservation, but ruining a major relic under state protection.”

In an interview with Caixin on Wednesday, Zhang also claimed that workers tried to sell some old bricks to him “for several thousand yuan,” including “a brick with an inscription on it.”

The Fengyang County Cultural, Radio and Press Bureau overseeing heritage affairs first defended the conservation program, saying in a statement on Tuesday that the program was carried out in accordance with a plan approved by the State Administration of Culture Heritage.

Electric drills were used because the old bricks and binding material were too hard to remove by hand, it said. The workers hadn’t sold any old bricks, but simply bragged about the value of the ancient bricks in front of tourists, the bureau said.

The provincial cultural heritage bureau ordered the county authority on Wednesday to suspend conservation work pending a review to assess possible damages. The provincial authority stopped short of saying whether anyone would be held accountable.

The Zhongdu Imperial City was listed as a heritage site under state protection in 1982. It is among 4,000 such sites with national-level protection status in China.

But several high-profile relics in the list have been damaged during restoration.

Photos showing a section of the Great Wall in Suizhong county in Liaoning province covered in thick concrete during a government-sanctioned restoration operation triggered a huge uproar in September.

The segment of the ancient wall built in the Ming Dynasty is also in the national list of protected heritage sites.