By Wang Duan and Yang Yanwen in Hong Kong, Li Zengxin in Washington, D.C., An Ning in London and Yu Ning in Beijing 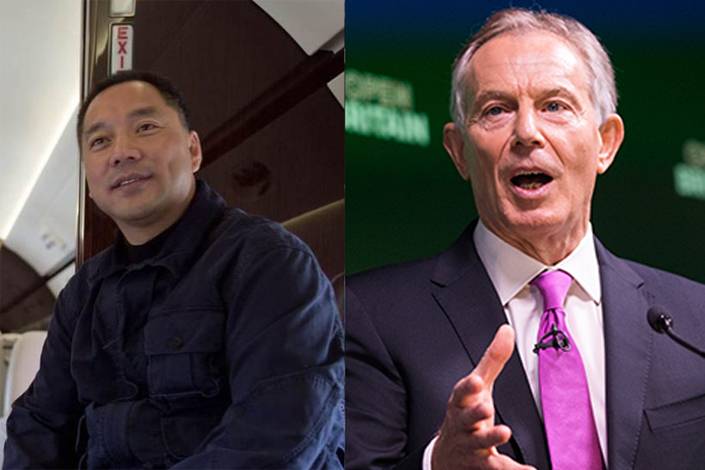 But the investment has resulted in billion-dollar losses and a failed lawsuit.

Six years after leaving Downing Street, Blair came under scrutiny in September 2013 for taking luxury private jet trips to the Middle East as a United Nations peace envoy. British media questioned the former prime minister over who paid the thousands of pounds charged for every hour of flight.

Blair’s interest in private jets is no secret. According to Britain’s Daily Mail, Blair proposed while in office to have a presidential-style plane for the head of state, which was rejected by the parliament as too expensive.

During his tenure as special Middle East envoy, Blair frequently used private jets for global trips, which was extensively reported by British media. Among those reported to have funded his private jet trips were Libya’s former dictator, the late Muammar Gaddafi.

Caixin recently learned from sources that Chinese businessman Guo Wengui traveled with Blair to the Middle East in 2013 and paid for one such trip. Blair introduced Guo to key Abu Dhabi figures, including the Crown Prince, Sheikh Mohammed bin Zayed Al Nahyan.

Guo, 50 years old, is the controlling shareholder in property developer Beijing Zenith Holdings and Beijing Pangu Investment. Interpol put Guo on its “red notice” list of wanted people in April. The Chinese government referred to Guo as a “criminal suspect.”

Guo’s relationship with the Blair family can be traced back to 2009, when Guo bought 5,000 copies of wife Cherie Blair’s autobiography, “Speaking for Myself,” according to British media reports. The reports cited Mrs. Blair as saying she has met Guo “a couple of times but doesn’t know him well.” But sources familiar with the matter said Guo and Blair stayed in contact until Guo was targeted by Interpol.

In 2013, the year Blair made the Middle East trip funded by Guo, the two met again in Beijing in December. Caixin learned from sources that Blair and Guo's most recent meeting took place this year.

Blair is well connected in the Middle East. Britain’s Telegraph newspaper reported in 2016 that Blair has an “extremely close” relationship with Sheikh Abdullah bin Zayed Al Nahyan, the foreign minister of United Arab Emirates and the brother of the crown prince.

The 2013 visit to the Middle East with Blair helped Guo build a connection with the Abu Dhabi royal family, from which he raised the funds for his doomed equity investment in Haitong Securities.

Blair’s office in a response to Caixin early Thursday said Blair has known Guo as a friend for 10 years and Guo has in the past been a donor to Blair's charitable work. It said Blair has never had a commercial contract with Guo nor received fees from him.

“You may also know that Mr Blair has in any event now wound up his company business to concentrate on his not-for-profit activities. So your story is wrong,” said the office, without answering Caixin’s question about Blair’s role in Guo’s connection with Abu Dhabi.

Officials in China and the UAE have been eyeing bilateral economic cooperation for some time. Chinese leaders early in 2012 proposed the establishment with the UAE of an intergovernmental joint investment fund. In late 2015, the official UAE-China Joint Investment Fund was created with $10 billion and has invested in clean energy, infrastructure and other projects. The fund is jointly managed by UAE’s state-backed Mubadala Capital, China Development Bank Capital and the State Administration of Foreign Exchange.

But Guo moved faster. After the 2013 Middle East trip with Blair, Guo began preparations for an investment fund with the UAE. Sources close to the matter told Caixin that Guo set up an investment fund in Hong Kong in 2014, with $3 billion raised from the royal family.

In May 2014, Guo started negotiations with the financial services giant UBS for an investment by the fund in Haitong, a major Chinese securities firm.

At that time, Guo was still a close ally of Ma Jian, the former vice minister of the Ministry of State Security, who later fell under a graft investigation.

In August 2014, Guo came into the spotlight with a major business dispute. A fight between Peking University Founder Group Co. and Guo’s Beijing Zenith Holdings was ignited by disputes over control and terms of the pair's jointly owned Founder Securities Co.

Amid accusations of fraud and other wrongdoing, the business dispute spilled over into graft charges and led to the detention of top executives from both sides, including Founder Group CEO Li You. Guo soon fled China.

Li was detained over charges of corruption in January 2015, and Ma Jian came under investigation for alleged graft. Guo’s assets in China were frozen in the unfolding investigation.

A Caixin report in March 2015 revealed how Guo and Ma formed a close alliance, using national security power to meddle in business deals. In response to Guo’s subsequent attacks on Caixin, Caixin filed lawsuits against Guo and his companies, accusing him of fabricating and disseminating false information.

But Guo’s troubles on the mainland didn’t stop his bid for Haitong through the Hong Kong-based fund, maneuvering capital from UAE and investment vehicles to seek control of the brokerage house while he remains a fugitive overseas.

According to filings with the Hong Kong stock exchange, Haitong Securities in December 2014 revealed a plan to issue new shares to raise HK$30 billion ($3.9 billion) from seven designated investors.

Caixin found that at least three of the seven were closely connected to Guo. They acquired more than 67% of the new shares issued by Haitong. That gave them a combined 11.2% stake in the company after the placement, exceeding the 3.5% owned by the largest single shareholder, state-owned Bright Food Group.

But Guo’s investments in Haitong suffered huge losses in the stock market meltdown in summer 2015. This triggered a lawsuit filed in the U.S. by Guo against the investment bank UBS in October 2015 seeking compensation for losses on a margin call.

According to court documents, in which Guo was identified as Kwok Ho Wan, a company Guo controlled in 2015 bought 569 million of Haitong’s Hong Kong-listed shares with $1.275 billion, including $500 million of Guo’s capital and $775 million borrowed from UBS.

Sources with knowledge said the $500 million came from the fund Guo raised from Abu Dhabi.

Guo’s company made the investment through another company called Dawn State. This arrangement was to avoid Guo having to publicly disclose his holdings in Haitong, court documents showed.

The transaction was completed in May 2015, when Haitong’s shares had enjoyed a months-long spike. But the stock soon slumped amid the market meltdown. In just a few days in July, Haitong’s shares in Hong Kong plunged by 30%.

According to court documents, UBS issued a margin call on July 6, demanding a transfer of at least $200 million within 24 hours. Guo failed to make the payment, and UBS the next day sold all of the Haitong position held by Dawn State, resulting in a $495 million loss for Guo.

Guo blamed UBS for misleading him into underestimating the urgency of a margin call and hired the famous U.S. attorney Davis Boies to sue UBS in a state court in New York. Forbes first reported the lawsuit.

But the court dismissed the lawsuit, saying it was not the appropriate venue to adjudicate an investment that took place and was negotiated in Hong Kong.

Guo recently expressed publicly that he will launch another lawsuit against UBS in Hong Kong.

An investment bank source told Caixin that William Je (Je Kin Ming), an old acquaintance of Guo, assisted in his investment in Haitong. At the time, Je was China chairman of Macquarie Group, one of the investment banks hired for Haitong’s placement along with UBS.

“Je at that time held discussions about Haitong’s share sales on behalf of Guo,” the source said.

Je declined a Caixin request for comment on the matter.

Je left Macquarie in March 2015 and joined Guo’s Hong Kong-based ACA Capital Limited Group, the asset management firm, which, according to its website, focuses on investors from Middle East and East Asia.

Caixin’s investigation of company registration documents found that a number of ACA subsidiaries in Hong Kong share the same registration address with companies controlled by Guo Qiang, who is Guo Wengui’s son.

"The UAE will never become a safe haven for any corrupt Chinese fugitive," Wang said.