World Champ No Match for Artificial Intelligence in Game of Go 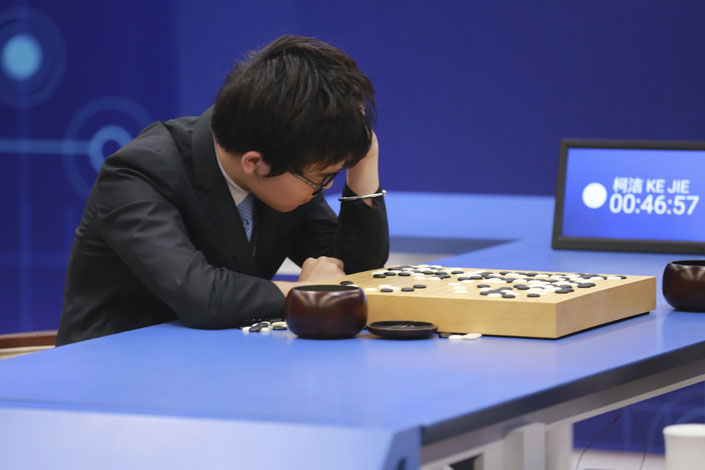 Google’s AlphaGo beat the world’s top-ranked player Ke Jie again in the ancient Chinese board game of Go in Wuzhen, Zhejiang province，China, on May 25. Photo：Visual China

(Beijing) – A sense of inevitability hovered over a grid-like board on Thursday as man faced off against machine in what turned out to be the last stand for the world’s champion master at the ancient Chinese game of Go.

Within four hours, Chinese national Ke Jie had surrendered to AlphaGo, losing for the second time in their three-game match pitting the old against the new. A third and final game will take place on Saturday, where the best that Ke, who will turn 20 in August, can hope is to save a little face for both himself and humanity.

The atmosphere at game two of the match was decidedly more relaxed than the first one on Tuesday, when Ke took about four hours to lose to AlphaGo, a computer designed by Google’s DeepMind unit, said Huang Shan, a reporter covering the event in the ancient and scenic water town of Wuzhen for MIT Technology Review’s China affiliate.

A humbled Ke was surprisingly sanguine in the rest day between the two matches, posting photos on his microblog of himself visiting a local park where he tried his hand at archery, picked some fruit from a tree, and enjoyed some fishing in Wuzhen.

In the year leading up to the highly anticipated match, Ke slowly transformed from a self-assured world champ to a more timid opponent, realizing he would play against a machine that was undefeated in 61 contests, with only one tie. In a recent appearance on a cultural affairs TV program, Ke was quoted as saying: “I’m not afraid of losing to AlphaGo and being ridiculed by everyone. My fear is that my loss would represent the loss of something forever.”

The sense of loss was also tempered with a feeling of inevitability on the internet, where fans were mourning the defeat.

“AlphaGo was really too strong,” said one observer named Gaogemingziduoleia. “In the end Ke Jie is just a human, with feelings and able to fell pressure. He’s already super, representing the greatest at Go.”

The outcome was all too familiar for many, repeating a stream of defeats of humans to computers at some of the world’s oldest games. The first to fall was Gary Kasparov, master at Western chess, who was defeated 20 years ago by the famed IBM computer called Deep Blue. Last year, an earlier version of AlphaGo defeated another Go master, South Korean Lee Sedol, by a score of 4-1 in a five-game match.

In this case the game had extra meaning for the millions of Chinese followers, since both Ke and the game of Go itself come from their culture, one of the world’s oldest with 3,000 years of history.

AlphaGo’s human master, DeepMind CEO Demis Hassabis, was full of praise for Ke throughout the match, complimenting the Chinese champion up to the very end.

“AlphaGo wins game two. What an amazing and complex game!” he wrote on his Twitter account after the second game ended. “Ke Jie pushed AlphaGo right to the limit.”

With a history of more than 2,500 years, Go, known as weiqi in Chinese, pits two players against each other on a grid-like board using black and white chips or stones. It is believed to be the world’s oldest continuously played board game, and was once considered a past-time of aristocrats. The game was mostly dominated by South Korean and Japanese masters in the 1980s and 1990s, including a 16-year stint as world champion by South Korean Lee Changho starting in 1991.