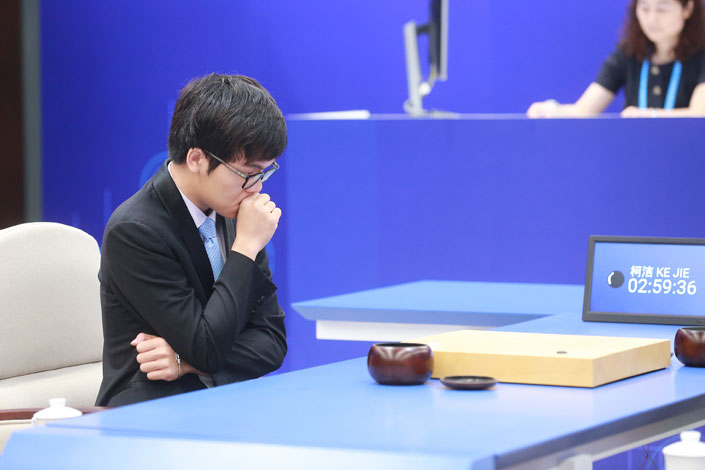 (Beijing) — Hubris took a back seat on Tuesday in the historical canal town of Wuzhen, as the reigning world champion at the ancient board game of Go kicked off a three-game match against a machine that is undefeated in its brief lifetime.

At the end of day one, man was no match for machine as Chinese national Ke Jie lost the first game to AlphaGo, an artificial intelligence (AI) computer owned by internet giant Google, in about four hours.

In many ways, the matchup took on a meaning far larger than the actual contest, pitting one of the world’s oldest games and the civilization that invented it against a state-of-the-art computer backed by the world’s biggest internet company from the West.

Two observation rooms where some 200 reporters gathered to watch the match were quiet throughout the competition as all eyes followed the board on video screens. No one dared to break that silence as the results finally became apparent, said Huang Shan, a reporter who was there covering the event for MIT Technology Review’s China affiliate.

“This really is a kind of baptism involving a new culture meeting a very old one,” said Huang. “Another reason why it’s so widely followed is that Ke Jie, this Go master, has many qualities of the new generation of young Chinese. His attitudes toward AlphaGo in many ways reflect the attitudes of young people toward artificial intelligence technology.”

Anticipation of the three-game match has been building for since last year, when news about the faceoff was first mentioned after AlphaGo defeated South Korean master Lee Sedol by a decisive score of 4-1 in another widely-followed five-game match. Google confirmed the latest match last month, saying the three-game competition would kick off on May 23 in Wuzhen.

Transformation of a Champ

Chinese media has been chronicling the slow transformation of Ke, who will turn 20 in August, from a self-assured youth to a player coming to terms with the fact that his days as world champion could be numbered. A sense of humility has also crept over Ke this past year, who formerly appeared proud and rebellious in his microblog postings and media appearances, as the reality dawned on him that a loss against an AI program could hold much larger significance.

“I’m very honored to be representing humanity in this matchup with AlphaGo, to be standing from this high place of humanity to welcome the challenge from this machine,” Ke was quoted as saying in a recent appearance on a cultural affairs program on CCTV, China’s national broadcaster. “I’m not afraid of losing to AlphaGo and being ridiculed by everyone. My fear is that my loss would represent the loss of something forever.”

The match in many ways echoes a similar historic faceoff at the Western game of chess 20 years ago, which saw Russian master Gary Kasparov lose to an IBM-owned cyber master named Deep Blue in a highly publicized competition. In this case the match has even more meaning to people in China today, who are trying to find ways to combine their 3,000-year-old civilization with modern technology.

“Ancient-meets-modern is one of the attractions of (this matchup) because China is very proud of its ancient culture, but at same time they’re modernizing, doing their best to incorporate ancient culture into the modern world,” said David Moser, academic director of the Chinese studies and internship program at Capital Normal University in Beijing. “Because China has so much cultural identity vested in this game, they feel that it’s part of their soft power, part of their cultural heritage.”

Developed by Google, the AlphaGo being faced by Ke is an even sharper rival than the one that defeated Sedol last year, in a competition that fixated China over the course of a week. In its brief lifetime, the version 2.0 AlphaGo Master now competing in Wuzhen had a daunting record of 60 wins, no losses and just one tie going into the Tuesday game.

With a history of more than 2,500 years, Go, known as weiqi in Chinese, pits two players against each other on a grid-like board using black and white chips or stones. It is believed to be the world’s oldest continuously played board game, and was once considered a past-time of aristocrats. The game was mostly dominated by South Korean and Japanese masters in the 1980s and 1990s, including a 16-year stint as world champion by South Korean Lee Changho starting in 1991.

In the ongoing debate of man-versus-machine, man should be less worried about being defeated by machines in this case than being controlled by them, said Hu Yulin, an assistant professor who specializes in the history of science at Tsinghua University. “Our 9-to-5 lifestyle, our pursuit of profits, the governmental structure of our society, all of these are already surrounded by the logic of machines,” he said.

The next game in the match will take place on May 25.