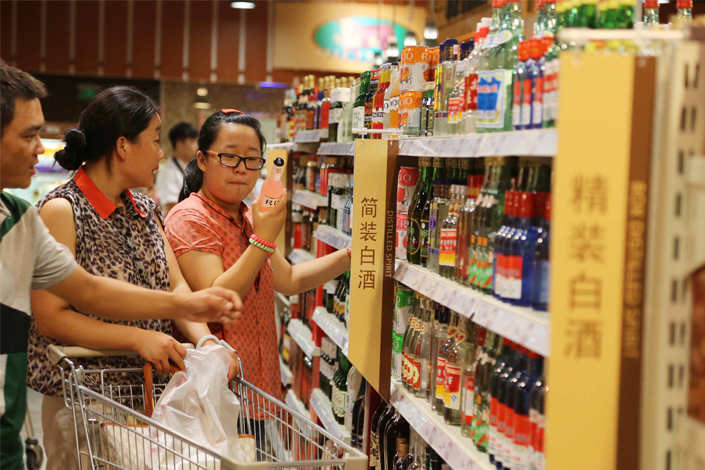 People choose wine in a supermarket in Xuchang, Henan province, in 2013. Photo: IC

(Beijing) – China e-commerce giant Alibaba continues to expand in brick-and-mortar retail, announcing on Friday it had bought an 18% stake in a supermarket brand owned by Bailian Group, a retail giant that became Alibaba’s partner three months ago.

Alibaba Chairman Jack Ma once said that the future of retail will be a combination of online and traditional selling.

Its $80-million purchase deal of Bailian-owned supermarket brand Lianhua occurred at a time when leading Chinese players are seeing their profits rebound, while some foreign firms are still struggling.

China’s department store operators, in contrast, have started to recover after the e-commerce boom stole their thunder for years. Some consumers have returned to brick-and-mortar shopping due to concerns about the online world’s problems with counterfeits, delivery delays and lack of physical interaction with goods.

The top 10 department store companies in China, whose revenue accounted for around half of the industry’s in the first quarter, have generally reported progress. The largest, Friendship Group Co. Ltd., a subsidiary of Bailian, made a profit of 13 billion yuan ($2 billion) in the first quarter. This was down 11% year-on-year. However, the drop was far less than the drop of 48% in the first quarter of 2016 compared to the same period previous year.

Other smaller rivals are doing even better, with the profit of CCOOP Group Co. Ltd. surging fivefold.