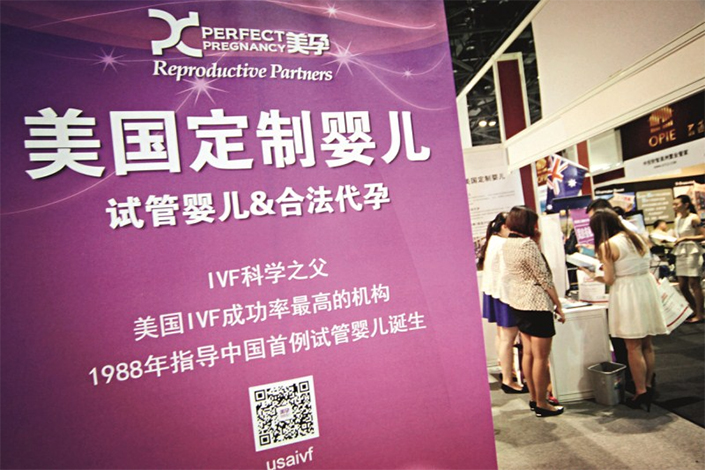 A surrogacy agency introduces test tube baby service and legal surrogate in U.S. to their Chinese customers in an exhibition in Beijing, on July 4, 2014.

(Beijing) — It took three trips to the United States in the course of one-and-a-half years and a whopping 1.8 million yuan ($260,000) payment before Wan Quan could hold his son born through surrogacy in the U.S. last summer.

The staggering sum that included $70,000 for the surrogate mother is more than three-times the amount for a similar service in China, said Wan, a businessman from the southwestern city of Chengdu, who used a pseudonym to protect his identity.

But the extra money not only helped him to shielded his family from the prying eyes from friends and relatives and the stigma, but also avoid the legal landmines associated with surrogacy in China.

Although the Chinese government banned surrogacy in 2001, private clinics offering such services continue to operate in a legal gray zone. This means contracts signed between agents, surrogates and couples wanting children are not legally bindings, leading to custody battles and even blackmail, where surrogate mothers have threatened to abort a fetus if the families didn’t pay more money.

There are no authoritative figures, but Wang Feng, who runs a fertility clinic in Wuhan, Hubei province, says up to 3,000 surrogacy operations are carried out each year in his province alone. He estimates the number nationwide could well exceed 20,000 per year.

Demand for black-market services has grown after the government started easing family planning restrictions in 2014. Couples eligible to have a second child, but feared a high-risk pregnancy if the mother was beyond child-bearing age, or had trouble conceiving, often turn to surrogacy.

Wan and his wife, who already had a six-year old daughter, had always wanted a second child, but hesitated because of China’s one-child policy put in place since the early 1980’s.

The government eased its iron grip by allowing couples — where either the husband or the wife was an only child — to have a second baby in 2014, and later moved to scrap the one-child policy in early 2016.

But the change came too late for Wan and his wife, who were in their late 30’s and found they had trouble conceiving.

After several failed attempts, Wan said he and his wife opted for surrogacy and chose a facility in the U.S. over one in China to avoid legal uncertainties and scrutiny from close family and friends.

The couple’s hopes were dashed on their first trip in early 2015, when the IVF implant on the surrogate mother failed, but it succeeded in a second attempt.

The child, a boy weighing 2.5 kilograms, was born to a 27-year-old Caucasian woman with eggs donated by a third-party at Mountain View Hospital in Las Vegas, Nevada in the summer of 2016.

It was a dream come true, Wan said, but “it’s a little strange to think that the child was carried to term by a woman I’ve never met.”

“This will be a secret between my wife and I,” he said. “I’ll only tell my son that he was born in the U.S.”

Commercial surrogacy is banned in most parts of the world, as well as in many U.S. states. But the few U.S. states that offer surrogacy services have seen soaring demand from wealthy Chinese clients. California in particular, with it is culturally friendly enclaves, and favorable state laws that regard intended parents as a baby’s legal parents even before birth if proper court documents are filed, has become a magnate for surrogacy seekers.

About 1,000 Chinese couples seek surrogacy services in the United States annually, according to Joanne Zhou from the Fertility Center of Las Vegas.

China’s first baby conceived through in vitro fertilization (IVF) was born in 1988, but it took another decade before a woman in Beijing gave birth to the first baby via surrogacy.

But, a roaring ethical debate that ensued prompted Beijing to ban the procedure in 2001 and regulators have intensified a clampdown on illicit services in recent years by targeting public hospitals that outsource their fertility clinics to private operators to profit from surrogacy services.

Despite the crackdown, these underground clinics are flourishing as a rise in infertility rates fuels demand. One in eight people of child-bearing age in China, or 40 million people, suffer from infertility, according to a 2012 study released by the government-backed China Population Association. It was an alarming increase from two decades earlier, when the country’s infertility rate was 3%, it said.

But because these services operate in a legal limbo, distrust among clients, agents, facility operators and surrogate mothers runs deep, and disputes were rampant.

One high-profile case involving an infertile woman and her in-laws over the custody of her fraternal twins — a boy and a girl — in Shanghai six years ago led to a national debate over how the ban was affecting the legal rights of children born through surrogacy.

According to case records, Li Lin, in her early 40’s, and her husband had twin babies via surrogacy using the eggs from another woman seven years ago.

Her in-laws, who were aware of the arrangement, took her to a Shanghai court in November 2015 demanding sole custody of the two children after the death of Li’s husband in 2014, saying Li had no biological link to them.

The No. 1 Intermediate People’s Court in Shanghai upheld Li’s rights to the children saying it served their best interest if they were left in the care of Li as “a step mother”.

“It’s imperative for us to better protect children born via surrogacy in areas such as custody, child support and inheritance irrespective of whether surrogacy was illegal or not,” the court concluded in its verdict.

The case again made national headlines in March when the country’s Supreme People’s Court, in a report to the top legislature the National People’s Congress, cited the ruling as an example or protecting children’s rights although surrogacy remained illegal.

“In practice, all parties including clients, surrogate mothers, and egg donors usually sign a contract with an agent even though they know that such agreements are useless under Chinese law and regulations,” said Wang, who runs the Wuhan fertility clinic.

But there were occasions when clients have pulled out of contracts half way through or demanded a refund or extra compensation from agents when a pregnancy had resulted in a still birth, he said.

There were also incidents where surrogate mothers threatened to abort a fetus to extort more money from intended parents, Wang said.

In rare instances, surrogates have lied about having a miscarriage to keep both the advance payment and the child, he added.

A man in Xiamen, Fujian province, hired a surrogate mother via a local agent in 2011, after his only daughter, who was in coma from a traffic accident for three years, died in 2007.

But the woman refused to hand over the baby girl born the following year.

After he cut off her child support, the surrogate mother took him to court and in an ensuing custody battle, a local court ruled against the man on the grounds that their surrogacy agreement wasn’t legally binding. He was also ordered to continue to support the child until she turned 18, court papers showed.

There are worse tales. “In some instances, agents have given drugs to surrogates to induce an abortion before they have completed the first trimester — without the women’s knowledge — so that agents could keep a large chunk of the money clients had already wired to the their accounts,” said Li Yue, who runs a surrogacy service in Xian, northwestern Shaanxi province.

Would-be surrogate mothers were usually women in their late 20s or early 30s who’ve already given birth to their own children, said Li. Many of them were from poor regions with little education and were vulnerable to scammers given the lack of legal protections, he added.

Several agents told Caixin that a surrogate mother usually gets paid between 100,000 to 200,000 yuan per pregnancy, a tempting amount for many in impoverished villages in China.

Qiqi, 26, a single mother with a seven-year old girl from Liaocheng, in eastern Shandong province, said that she learnt about surrogacy from her cousin who had found a client.

Qiqi said she was keen to follow in her cousin’s footsteps because it offered quick money.

“But if I find a client, I have to leave my daughter behind for at least a year and lie to my family saying I’ve found a job in another city,” she said.

The strict ban on surrogacy remains a contentious issue in China. Proponents of the ban like Ma Yinan, a professor of law at Peking University says commercial surrogacy “turns downtrodden women into nothing but a reproduction tool for the rich, by offering them the possibility of renting out their wombs for money.”

But others, like Luo Guangnan, head gynecologist at the Luohu Hospital in Shenzhen, says surrogacy could be a lifeline for women caught in poverty if they are guaranteed about 200,000 yuan for helping others to have a baby after they’ve had their own children.