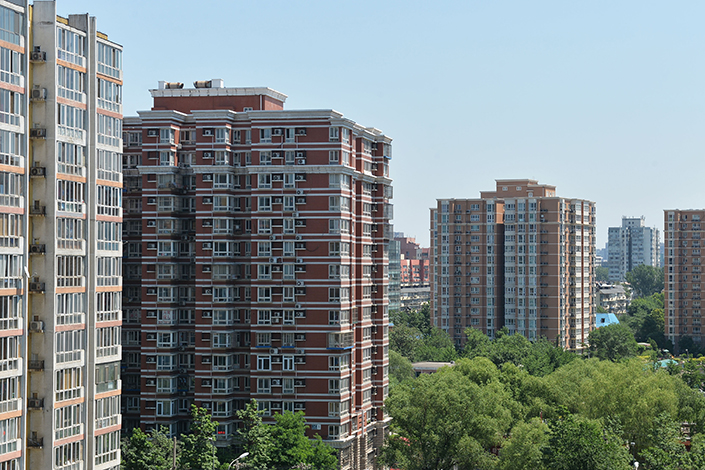 A view of residential buildings in Haidian district, Beijing, on June 1. May's new-home supply in first-tier Chinese cities was down 50% month-on-month and from a year ago. Photo: IC

(Beijing) — Supply of new homes in some first-tier Chinese cities dropped significantly in May, after local governments denied developers pre-sale permits for new properties that were deemed “too expensive.”

Last month, total new homes available for sale in Beijing, Shanghai, Guangzhou and Shenzhen plunged 53% from April, according to Shanghai-based real-estate research institute CRIC. New supply, measured in floor-space terms, was down 61% from a year ago.

In response to runaway home prices, Chinese leaders said in March that homes should not be “speculated on,” and called for a “long-term mechanism” to prevent a housing bubble from forming.

Local governments, especially in top-tier cities, have since then stepped up efforts in an attempt to contain the hype. Among the many measures, local governments put a lid on new-home prices by granting pre-sale permits only to “reasonably priced” new homes. Some developers are said to have cut prices in order to obtain the rights to sell. Some who stood by their prices were not able to sell.

The government has never disclosed how price reasonableness is assessed. Kong Qi from real-estate agency B.A. & 5I5J Group added applications for permits are assessed on a case-by-case basis.

Local governments have also hiked minimum downpayment requirements and increased scrutiny on buyers’ eligibility to deter those seeking to purchase a new home.

In Guangzhou, for instance, new-home supply shrank 69% in May from April, according to real-estate agency Centaline Property. New-home online transaction registration, another key indicator of new-home sales, dropped 30% from a year ago.

Several developers told Caixin that Guangzhou city government has slowed down issuance of pre-sale permits to properties priced higher than the market average.

“In many major cities, we must wait for months to get pre-sale permits which may allow us to sell only part of what we have built,” said a real-estate company employee, who spoke on condition of anonymity.