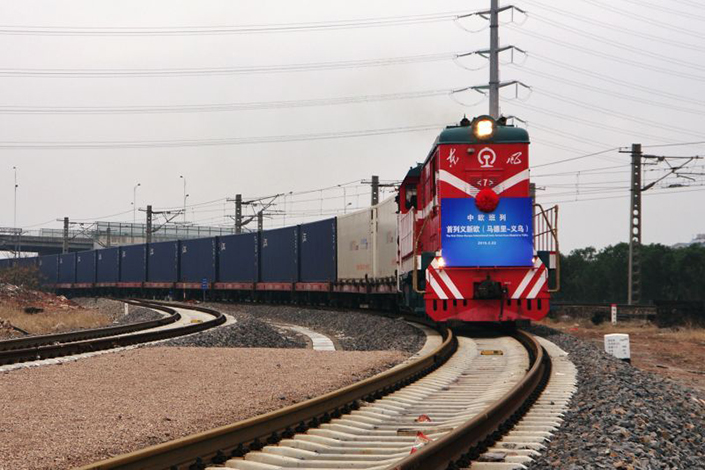 China rail freight rose sharply in the first five months of 2017, reversing a continuous decline since 2012. Above, the first YXE international container train traveling from Yiwu, Zhejiang province, to Madrid as part of the "One Belt, One Road" initiative, departs from a container terminal in Yiwu in November 2014. Photo: IC

Rapid growth in shipments between China and Europe stood out, helping ease pressure on maritime transport, in which several Chinese ports have experienced congestion.

The end of the five-year decline in volume comes as China’s economy slows and development in other means of transportation has squeezed the railway market.

A person from CRC told Caixin earlier that the progress has been a combined result of the operator’s improvement in providing freight service, the country’s efforts in supply-side reform within industries including coal and steel that rely on rail freight, and a recent government campaign restricting road transport from carrying coal amid air pollution.

Traffic on a major coal-shipping line between the cities of Datong and Qinhuangdao, which insiders see as a benchmark of commodity freight, grew 25% to 10.3 million tons in the first quarter of this year. Profit of the CRC affiliate behind the Datong-Qinhuangdao line surged more than 53% to 3.1 billion yuan ($456 million) during the same time, much better than the 13% profit growth of the industry nationwide.

Cross-border rail transport, facilitated by the China Railway Express trains that travel across Asia, has improved rapidly. Cargo trains that depart from China to other countries in the first quarter rose 175% to 593 units from a year before, while inbound trains increased 187% to 198 units.

China-Europe freight lines, which started in 2011 with only one exit center in the southwestern city of Chongqing, now have more than 10 hubs. Although rail is becoming more and more utilized, it is not a major means for containers to travel outside of China, with more than 90% last year being sent by shipping, according to the Ministry of Transport.

But the lines are more accepted now, and will have a larger market share in the future, especially because inland countries in Central Europe don’t have ports to dock cargo ships, several sources from multinational logistics companies and the CRC affiliate behind the lines told Caixin.

The goods carried by them are more diverse, as well. For example, items that have been transported from Europe to the Yangtze River Delta include medicines, baby-care products and home appliances, and not just food items, such as wine and olive oil, as before.

The development should help ease pressure on busy maritime traffic. As China’s trade increased at a faster pace in May than in April, and experienced a strong first quarter, congestion in ports, which started in Shanghai in April, has spread to other ports in China and other parts of Asia.

Passenger traffic has also picked up, rising 11.3% to 1.2 billion in the first five months compared to a year before, partly driven by two holidays at the beginning and end of last month, each lasting three days.