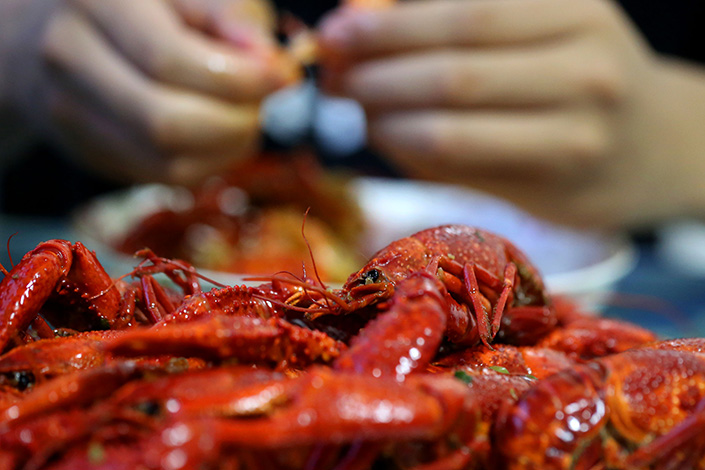 Production of farmed crawfish between 2007 and 2016 tripled, the Ministry of Agriculture said in a report released on Monday. Above, seafood customers shell crawfish in a restaurant in Hauian, Jiangsu province, on Saturday. Photo: IC

(Beijing) — China’s voracious appetite for crawfish has spawned a multibillion-dollar industry and tripled production of farmed crawfish between 2007 and 2016 to 850,000 tons.

Total output of the freshwater crustacean, including those caught in the wild, reached 899,100 tons last year, and consumption rose by nearly one-third over the past two years to 879,300 tons in 2016.

The booming crawfish industry, valued at 146.6 billion yuan ($21.58 billion) last year, employed over 5 million people on fish farms and in food processing plants and restaurants serving only sizzling crawfish dishes, according to a report released by the Ministry of Agriculture on Monday.

Crawfish, also known as crayfish or freshwater lobster, is an alien species brought to China in the 1920s. They made their way from the U.S. — where they are a staple in Cajun cuisine in Louisiana — through Hawaii to Japan as food for bullfrogs in the early 1900s, and brought to Nanjing by traders in 1929, according to a 2015 article on World of Chinese, a website dedicated to Chinese literature and culture.

Crawfish were long regarded as little more than a nuisance by Chinese rice farmers because the crustaceans ruined rice seedlings and dug tunnels through ridges on paddy fields, causing water loss. But adventurous farmers who found new ways of cooking the hard-shelled fish two decades ago started raising crawfish in their paddy fields. Over time, this cheaper substitute for lobster has become a nationwide delicacy and is usually enjoyed with beer on a hot summer evening.

Crawfish farmers in the central province of Hubei led the charge in farming the species, churning out 489,000 tons last year, or over 57% of the total output in China in 2016.

Four other provinces — Jiangxi, Anhui, Jiangsu and Hunan— came in second through fifth respectively in terms of crawfish output, accounting for more than 42% of the country’s production between them, the ministry said.

China’s restaurant-goers, especially young foodies, have found themselves in the claws of the crayfish mania that has swept across the country in recent years. In central Hubei province alone, over 15,000 exclusive restaurants are serving crawfish dishes, earning 33.3 billion yuan in total revenues last year, up by 30% from a year earlier, according to the report.

More than 20 special crawfish dishes have been developed in Nanjing, Jiangsu province, and restaurants serving them have made over 10 billion yuan in 2016, a 25% increase in sales from the previous year.

Hubei Zhouheiya Co. Ltd., a food giant in the central city of Wuhan known for its cooked and marinated duck meat products, launched a unit to sell ready-to-eat crawfish products earlier this month in an attempt to carve out a slice of the growing crawfish pie.

However, the industry has been dogged by fears of potential health risks linked to consuming contaminated crawfish products.

More than a dozen Nanjing residents came down with Haff disease in 2010 allegedly after eating crawfish, local media reported, but government investigators later said they couldn’t link the infection to possible contamination in crawfish. One cause of Haff disease, an infection which causes muscle decay and could lead to kidney failure, is consuming fish contaminated by toxic chemicals.

The Agriculture Ministry said that improvements in five areas, including crawfish processing and disease control, were needed to ensure the healthy development of the industry.