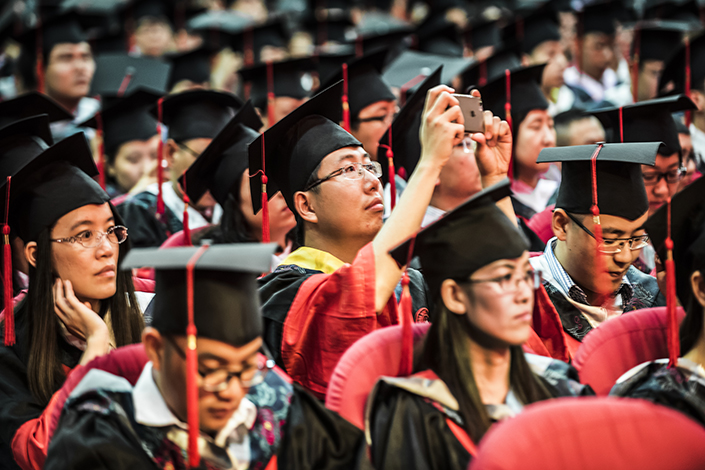 China's northeast is facing an exodus of talent as graduates from the rust belt provinces opt to look for work outside the region. Photo: Visual China

(Beijing) -- Three rust-belt provinces in China's northeast continue to suffer from an exodus of talent, with college graduates from these regions opting to work elsewhere, a recent report shows.

Last year, only 47.5% of university graduates from the three provinces of Liaoning, Jilin and Heilongjiang chose to work with local employers. That compared to 49.2% in 2015, according to the report jointly released by Beijing-based private consultancy Mycos and state-owned publishing house Social Sciences Academic Press.

That was far below the national average of three out of four college graduates finding a job in their home provinces. That signals a widening gap between these three northeastern regions and the rest of the country, particularly provinces along China’s affluent east coast.

The three provinces, with more than 115 million people, was China’s old industrial heartland in the 1980s and was home to many state-owned heavy industries. But it has fallen behind as the country pushed ahead with market-oriented reforms since the early 1980s, due to rampant bureaucracy and a lack of innovation.

The economy in Liaoning province grew by 2.4% in the first quarter this year, after contracting 2.5% last year, data from the provincial government showed.

Growth in the other two northeastern provinces also fell below the national average of 6.9% in the first three months of the year with the GDP of Jilin edging up by 5.9% and the economy in Heilongjiang expanding 6.1%.

Over the past decade, the three provinces lost more than one million professionals and company executives, according to Zhou Jianping, head of a department overseeing the revitalization of the northeast at the National Development and Reform Commission, China’s top economic planner.

Policymakers have attempted to revive these ailing economies by encouraging firms in high-tech manufacturing or information technology to move to the Northeast by offering them tax breaks or fat perks to qualified professionals, similar to the model followed by Beijing’s start-up hub, the Zhongguancun Science Park, Zhou said.

Despite the dismal employment situation in the Northeast, the job market for fresh graduates in China remained buoyant. Some 7.65 million college students graduated last year, and 91.6% of them had found a job within six months of leaving college or had chosen to pursue further studies, according to the “2017 Report on Chinese College Graduates' Employment Rates.”

Nearly 60% of the graduates who found jobs last year worked for private companies, compared to 53% four years ago.

Only 8% were recruited by a foreign funded company including joint-ventures and firms wholly-funded by foreign investors in China, down from 12% in 2012.

Nearly one-fifth of college graduates were hired by state-owned companies, down from 25% a year earlier. Those entering the workforce armed with a bachelor’s degree earned about 4,000 yuan per month on average, or 47,900 a year. Average salaries for fresh graduates went up by about 20% from a year earlier, the report said.