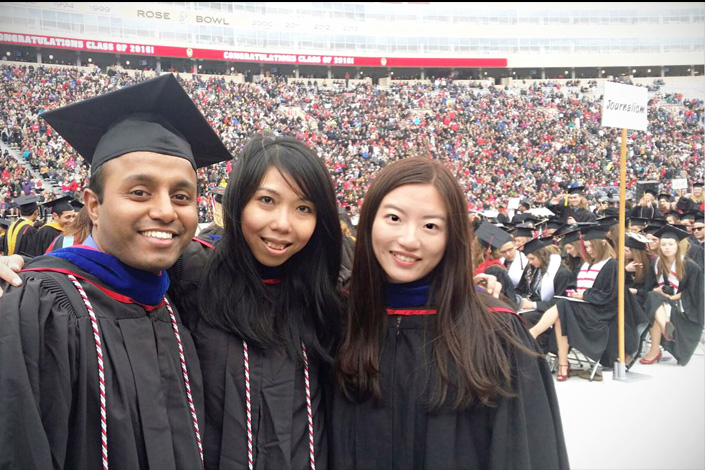 Wu Qihui (right) poses with classmates in May 2016 at the University of Wisconsin-Madison commencement in Madison, Wisconsin. Photo provided by Wu Qihui

(Beijing) — Nearly 70% of Chinese students who returned after studying abroad said they were "unsatisfied" with job opportunities at home because an overseas degree no longer guarantees them better pay than those who studied in China, a recent survey found.

Over two-thirds of those surveyed by the Center for China & Globalization, an independent think tank, said their annual salaries were comparable to their peers in similar positions who studied at home.

An increase in the number of returnees also means that foreign graduates are no longer a rare commodity in the intensely competitive Chinese job market. More than half a million Chinese students headed overseas for an education in 2015, and another 400,000 returned home, according to the Ministry of Education.

Nearly 2.8 million Chinese students have completed their studies abroad since 1978, after China opened up its economy. Nearly 80% had returned home by the end of last year, the think tank said in its 2016 Annual Report on the Development of Chinese Students Studying Abroad.

Ma Qicong, who returned to China last year after studying in the U.S., told Caixin that many returnees were also expecting higher salaries than what the market offered. Over three-fourths of those surveyed said they expected to earn over 70,000 yuan ($10,100) a year when they returned, but less than a third had found jobs that met these expectations.

Many were also struggling to find a job that fit their areas of expertise. Only 16.5% of returnees surveyed said they felt their jobs matched their field of study "very well."

Their dissatisfaction was compounded by the high cost of living in first-tier cities, where returnees tend to work. The think tank found that nearly 47% of returnees chose to live in the top three cities — Beijing, Shanghai and Guangzhou.

Many graduates from foreign institutions may feel unhappy because "in big cities in China, such as Shanghai or Beijing, it is difficult for most fresh graduates to make a living without any support from their parents," returnee Wu Qihui told Caixin. Wu finished a postgraduate program at a U.S. university this year.

Even though China is still the biggest source of foreign students in countries like the U.S., U.K., Japan and South Korea, the increase in Chinese people leaving for study abroad has slowed down in recent years while the number of graduates returning has increased.

In 2001, the flow of students out of China more than doubled compared to the previous year, while the number returning grew by just one-third — a difference of 81 percentage points. Last year, the gap had narrowed to only 2 percentage points, researchers said.

But a quarter of all people in the world studying outside their home country came from China as of the end of 2015, the report found. Over 1.26 million Chinese were living abroad last year for the purpose of receiving education, it said.